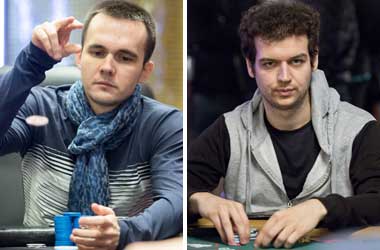 The PokerStars European Poker Tour (EPT) Barcelona is nearing its conclusion with various events already in the books, including the EPT Super High Roller which was taken down by Mikita Badziakouski.

The Belarusian poker pro took down the €100,000 buy-in tournament this week after outclassing poker legend Erik Seidel in a thrilling heads-up battle that lasted more than three hours. It was the second EPT Super High Roller title for Badziakouski and it came with a €1,979,220 payout. The poker pro first won the tournament back in 2018 for €1,650,300.

The tournament initially attracted a total of 68 entries which became eight during the final day. The eventual winner was seventh in chips when the action began on Day 3 but he quickly climbed up the ladder after scoring the first two eliminations. He first sent Nick Petrangelo to the rail in 8th place for €247,400 and then knocked out Mike Watson who finished 7th for €319,970.

Next to go was Teun Mulder who busted in 6th place for €415,630 courtesy of Seidel. Badziakouski then eliminated Timothy Adams in 5th place for €540,980. Heath bowed out of the game soon after, collecting €702,620 for his 4th-place finish.

With just three players remaining, Badziakouski climbed to the leading position and managed to widen the gap even further when he finished off start-of-day chip leader Kevin Paque in 3rd place for €913,730.

Badziakouski entered heads-up play well ahead in chips against Seidel but the latter didn’t give up without a fight, even grabbing the lead on multiple occasions. It took Badziakouski more than three hours to finally capture the title, making his victory official on the 123rd hand of the final table. It was still an impressive run for Seidel who ended his bid in 2nd place for €1,286,490.

Michael Addamo also emerged as a big winner at the festival after winning the €50,000 Single-Day High Roller II, topping a 62-entry field to walk away with a top prize of €917,330 and his first-ever EPT title.

The victory adds to the Australian poker pro’s impressive list of accomplishments in the live tournament arena which so far earned him almost $20.8 million. The EPT title also marks his third major victory on Spanish soil this year as the poker pro captured two Triton Series events in Madrid in May for a combined €1.5 million.