PokerStars USCOOP Includes $4.5M in Guarantees Up for Grabs

PokerStars USCOOP Includes $4.5M in Guarantees Up for Grabs 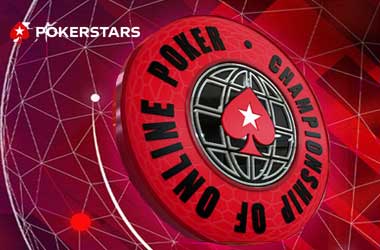 The US Championship of Online Poker (USCOOP) returns to PokerStars USA this September featuring $4.5 million in total guarantees. The action kicks off on September 9 and runs through September 26 in Pennsylvania, Michigan, and New Jersey.

At least 60 events are running in each state with buy-ins ranging from $20 to $1,000. The series is headlined by the “Championship” events which account for nearly half of the total guaranteed prize pool.

Let’s take a look at what’s in store for US Poker players in each jurisdiction.

Players in Pennsylvania will compete for the biggest share of the guaranteed prize money. A total of $2,000,000 in guarantees will be awarded across 77 events, 19 of which are Championship tournaments that come with a huge $1.1 million guarantee.

The Michigan series has 77 events just like Pennsylvania, however, the guaranteed prize money on offer is lower at $1,500,000. Michiganders have helped Pokerstars dominate in 2021 and will compete in 17 Championship events which feature $657,000 in combined guarantees.

The New Jersey edition may be the smallest among the three but still offers huge value for players. The series will award $1,000,000 in guarantees spread out across 61 events. The schedule includes 16 Championship events, with $412,000 in guaranteed prize money up for grabs.

Among the huge-value events at the series is the NJ Open Championship which has an entry fee of $100 and a guarantee of $25,000, as well as the Mini NJ Championship which features a buy-in of $25 and $7,500 in guarantees. Both tournaments will run on September 10.

Depending on their location, players can choose from a great selection of variants and formats, including PKO, Freezeout, Mixed-Game, Bigstack, PLO, 6-Max Turbo, and 8-Game.

The 2021 USCOOP was a huge success, attracting a total of 53,744 entries across all three states to generate $4.8 million in total prize pool, and this year will be no different.

You may visit the PokerStars website for the full schedule of the 2022 USCOOP.