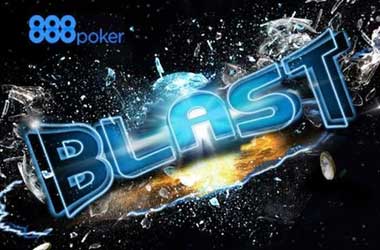 A player on 888poker won a huge jackpot less than a week after signing up with the site.

“Bellyfuff” wasn’t the only one to win a share of the jackpot prize as two other players who joined him in a BLAST Sit & Go tournament, “belacroatia1“ and “Brisels“, also turned their $10 investment into a five-figure payout.

Shortly after the three players entered the tournament, each sitting with 1,500 in starting stack, the game hit the $10,000x top prize pool multiplier which meant they would be competing for $100,000 in prize pool and each of them would walk away with a share of the jackpot, depending on their finishing positions.

“Brisels” who finished third took home $10,000, and that’s already a massive value as they only entered the tournament for just $10. “Bellyfuff” and “belacroatia1” entered heads-up play, with both players guaranteed to win at least $20,000. In the end, it was “Bellyfuff” who won the tournament and claimed the top prize worth $70,000. “belacroatia1” enhanced their bankroll by $20,000.

For those who are new to 888poker’s BLAST Sit & Go games, they are tournaments involving three players and are played just like a traditional short-handed sit & go, but with the addition of a BLAST all-in timer. Once the timer hits zero, the remaining players go all-in for each hand until a winner is determined. By this time, the game all depends on luck.

888poker’s BLAST games have become increasingly popular among players as they offer huge prizes for just a small investment. In August, the operator awarded over $400,000 in BLAST prizes, and the poker games had entry fees of less than $500.