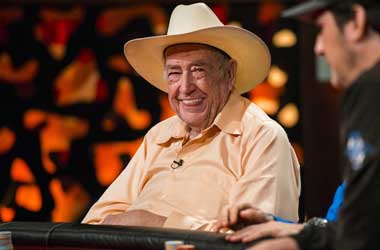 Poker legend Doyle Brunson has emerged victorious in his fourth fight against cancer. The 87-year-old happily announced on Twitter that his operation for melanoma, a serious form of skin cancer, was successful, and that he received an “all clear” from his doctor.

Brunson first discovered he had cancer back in 1962, shortly after tying the knot with his wife Louise. Late in the year, Brunson was diagnosed with melanoma after doctors discovered a metastasized and malignant tumor in his neck. It was also found out that the cancer had already spread to other organs.

Thanks to everyone that sent good wishes and prayers over my operation for melanoma. Got an all clear from my doctor today. That was my 4th win🙏 against that cancer. Stood on the 91st psalm, my favorite.

During that time, the couple were waiting for the arrival of their first child, and so an operation was done in the hopes of prolonging Brunson’s life long enough to enable him to see their newborn baby. However following the operation, the cancer entirely disappeared. Louise was also later diagnosed with cancer, and like Brunson, she surprisingly went into complete remission as well.

Brunson believes his faith and the prayers of loved ones, friends, and supporters played a crucial role in his full remission and recovery. During his first serious battle with the deadly disease, Brunson and his wife got in touch with Kathryn Kuhlman, an American evangelist well-known for miraculous healings.

Because cancer has a pattern of recurrence, Brunson has had to deal with the same disease a few more times over the past two decades, and would win in all those battles.

During those years, he was able to leave an indelible mark in the world of poker, winning 10 World Series of Poker (WSOP) bracelets, and scoring a total of 35 WSOP cashes in his long and rich career. He is also the author of Super/System originally published in 1978. The book has been widely credited with transforming poker by taking the average and ordinary players to the world of the pros and their paths to success.

Brunson is considered one of the greatest poker players of all time and was inducted to the Poker Hall of Fame in 1988 alongside Jack “Treetop” Straus. Throughout his career, Brunson has amassed more than $6 million in winnings. His son Todd is also an accomplished poker pro and is also a Poker Hall of Famer.

Brunson’s latest win against cancer means we will see more of the poker legend participating in a number of high stakes poker in his favorite room at the Bellagio which has recently been named “Legends Room“.