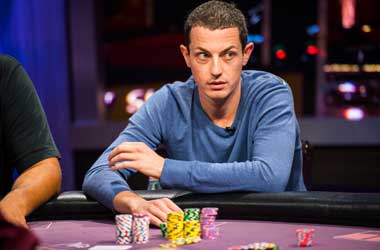 Tom Dwan is back in action! The 33-year-old is marking his return to the high-stakes arena by becoming part of the newest season of the legendary poker show “High Stakes Poker” which will be aired on PokerGO this December.

In a recent tweet, Dwan gave a glimpse of the live action at Aria, alongside some of poker’s biggest names.

The videos, which he shared earlier this week, showed an ongoing poker game involving six-figure stacks.

While it’s hard to confirm exactly how much money was on the table, we could tell that up to $100,000 was in action based on what was captured by the videos.

High Stakes Poker ran for seven seasons (98 episodes) from 2006 to 2011. The cash game TV program was one of the most-watched poker shows in history, set in the biggest and most prestigious venues in Las Vegas, including the Golden Nugget which played host to the show’s first season, The Palms, South Point Casino and the Bellagio.

Dwan’s teaser shows returning players Hellmuth, Ivey and Brandon Adams at the same table, alongside Jason Koon. With the latest line-up, Poker Central is aiming to bring back the original magic of the show as much as possible.

It remains unclear at the moment as to who will take charge of the commentary booth, but fans of the iconic show would definitely want to see the old tandem of AJ Benza and Gabe Kaplan back behind the mic.

Nick Schulman already announced back in September that High Stakes Poker will make a return. The full details have yet to be released, but Dwan’s videos give us an idea of what the latest season looks like.

Dwan Hopes To Have Another Good Run

Dwan’s performances in the previous seasons were exemplary. Among the most memorable poker hands from the show was Dwan’s incredible bluffs with top pair against Greenstein who had pocket aces, and Peter Eastgate who had trips.

The high-stakes pro also engaged in a massive triple barrel bluff against Ivey, and won one of the biggest pots in televised poker history after bluffing Greenstein off pocket aces in season 6. Dwan is looking forward to another strong run in the show’s upcoming reboot.