Moneymaker’s Road to PSPC Kicks Off Next Week in London

Moneymaker’s Road to PSPC Kicks Off Next Week in London

Moneymaker’s Road to PSPC Kicks Off Next Week in London October 15, 2019 Mario Alfonsi 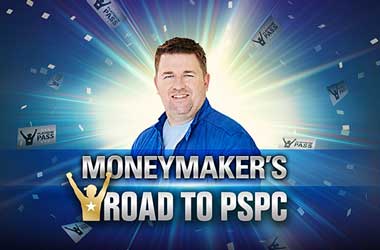 PokerStars is once again giving away Platinum Passes to the highly-anticipated 2020 PokerStars Players NL Hold’em Championship (PSPC), via several events taking place across the globe in the run up to the massive tournament.

One of these special events is the Moneymaker Tour which will take place in London from Oct 24 to 27.

Here are the details on how to win a coveted PSPC Platinum Pass.

Chris Moneymaker will drop by Le Meridien, Piccadilly in London, to host three tournaments, the highlight of which will be the £140 NLH Moneymaker’s Road to PSPC. There will be four opening flights taking place on October 24-27 and players will kick off the action with 30,000 in chips.

Single re-entry is allowed during each starting flight, within the late-registration period, as long as there are still vacant slots. A winner will be crowned on October 27, and will take home a Platinum Pass, alongside the top prize and a trophy.

The festival runs in partnership with The Hippodrome Casino. Those keen on taking part can register in advance at the PokerStars Live Poker Room at the casino in Leicester Square, London. Don’t forget to get some practise in by checking out some of the UK’s best poker sites, and gain the upper hand at the event.

The Moneymaker’s Road to PSPC also features two other events, offering huge prizes. There will be a £275 buy-in NLH MINI Series on October 26-27, as well as a £220 buy-in PLO Double Chance on October 27. Players may also take part in cash games running 24/7 at the PokerStars Live Poker Room at The Hippodrome Casino.

The Platinum Pass, which is worth $30,000 (€26,000), includes the €22,500 buy-in into the 2020 PSPC along with accommodation, travel, and other miscellaneous expenses. These special passes will give players a once-in-a-lifetime opportunity to take part in one of the biggest and most prestigious poker festivals in the world and become instant millionaires if they can win!

The inaugural PSPC held in January 2019 was taken down by Ramon Colillas, a former fitness instructor from Spain who qualified via a Platinum Pass which he won by topping a poker leaderboard in his home country. Colillas outlasted a huge field of 1,039 players, swelled by 320 Platinum Pass holders, to secure the title and a whooping top prize of $5.1 million.