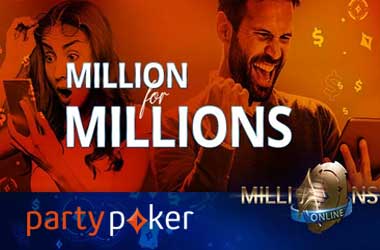 partypoker has launched a free-to-enter million-dollar promotion for its upcoming MILLIONS Online tournament which is set to take place this December. Online satellite tickets worth $109 will be given away to thousands of players as part of the promotion which kicked off on October 7.

The MILLIONS tournament is one of the most highly-anticipated annual online poker tournaments in the world. This year’s edition will run from December 1-10, guaranteeing a massive $20 million prize pool for an entry fee of $10,300. Each year, partypoker hosts a special promotion to give players the opportunity to take part in the event at a more affordable price.

Last year, “Scarmak3r” entered a $22 buy-in sub-satellite to qualify for the huge event. He ultimately finished third and took home a whopping $1.3 million. This year, players will get the chance to follow in the footsteps of Scarmak3r through partypoker’s Million for Millions (M4M) promotion.

This latest promotion sponsored by partypoker is mission-based, meaning players will be tasked to accomplish personalized challenges. Upon completion of the tasks, the player will then receive an M4M ticket which he or she can use to take part in either an MRM All-In Shootout or an M4M freeroll tournament. These tournaments are offering $109 MILLIONS Online satellite tickets which will ultimately lead you to the huge event in December.

If you are keen on taking advantage of this promotion, you are advised to visit the partypoker website to know more about the personalised challenges. Just like the previous mission-based promos from partypoker, the challenges are expected to include playing some qualifying fastforward hands at certain stake levels, or playing SPINS games. Take note though that there will be new challenges every three days regardless of whether or not you’ve finished the previous tasks. The M4M promotion is valid until November 4.

After completing the challenge, you will automatically receive your M4M ticket which will be credited directly to your account. The promo requires manual registration for your preferred M4M event. M4M Shootout takes place at midnight daily, while M4M Freeroll is also scheduled daily at 8pm.

If you’re among the lucky winners of the $109 MILLIONS satellite ticket, you may use it to take part in phased satellites. You need to get through the first phase which takes place four times daily in order to advance to phase 2 final on Sunday. If you’re successful at phase 2, you will be awarded with the much-coveted $10,300 ticket into the MILLIONS Online tournament.