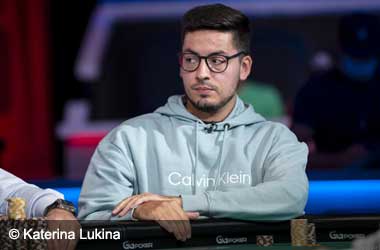 Ignacio Moron emerged victorious in the latest edition of GGPoker’s flagship tournament Super MILLION$. A total of 171 entrants paid $10,300 to enter the tournament, creating a total prize pool of $1,710,000.

In the end, it was Moron who took home the lion’s share of the prize, worth $347,576. Additionally, the Mexican poker pro earns bragging rights for having his name added to the awesome list of GGPoker Super MILLION$ champions.

The final table got off to a quick start, with one player knocked out just 15 minutes after the action commenced. “LJoseph62“ held pocket queens and then flopped a king to defeat Zhao Zi Long‘s ace-king. Long finished in 9th place for $49,653.

Next to go was Anderi “Mr-Doberman” Nikonorov whose pocket nines lost to the pocket kings of Rodrigo Sirichuk, enough to send him out of the game in 8th place for $63,326.

With seven players remaining, short-stacked Aleks “JustaMortal” Dimitrov moved all-in with ace-deuce under the gun. He was confronted with Moron’s pocket tens, and his journey ended right there. Dimitrov earned $80,765 for his 7th-place finish.

The tournament’s first six-figure payout went to Samuel “vivaegipto” Bernabeu who was eliminated in sixth place for $103,006 courtesy of Moron.

Three time champ Wiktor Malinowski, who is one of the world’s most accomplished online poker players, was also part of the final table. He didn’t get the title this time after busting in 5th place taking home $131,371. Shortly after Malinowski’s exit, Jack Salter followed, losing his ace-jack to the ace-king of “LJoseph62“. Salter walked away with $167,547 for finishing 4th.

Next out was Sirichuk who called off his remaining stack and ended up losing them all to Moron. The Brazilian settled for 3rd place with $213,685 in winnings.

Moron entered heads-up play with a huge chip lead over “LJoseph62” but the latter managed to turn things around at some point during the one-on-one battle. Moron didn’t give in and regained the lead. In the final hand, “LJoseph62” went all-in with queen-deuce against the jack-five of Moron. “LJoseph62” flopped a queen to secure a double, but Moron’s cards unexpectedly improved to a wheel straight and the game was over.