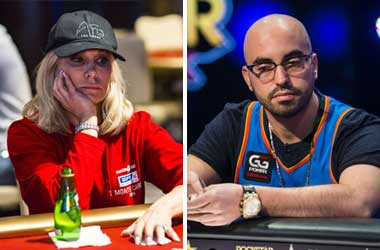 High-profile poker pros allegedly involved in various forms of cheating has been a hot topic on social media recently, with Bryn Kenney becoming the latest player to be accused of robbing innocent players out of huge sums online through illicit practices.

The tweetstorm continues as Lauren Roberts, Kenney’s “former” good friend, came forward to say she was a victim herself of Kenney’s shady schemes.

Equipped with screenshots of her recent conversations with Kenney, Roberts took to Twitter to reveal that the American poker pro threatened that he would spill the beans over a $2 million debt that Roberts allegedly failed to pay.

The debt is in connection with Roberts’ online poker pursuits on GGPoker wherein Kenney took charge of her finances. Roberts had been stuck on the losing end of her poker sessions on the online poker site, but unbeknownst to her, Kenney was poaching her for his horses.

Kenney’s alleged illegal activities were initially brought to light by Martin Zamani who admitted that he was previously part of the former GGPoker ambassador’s online poker cheating ring and that there were instances in which he and his fellow horses would play against Roberts under the direction of Kenney.

According to Zamani, Kenney was involved in collusion, ghosting, and multi-accounting. He was also accused of making dubious staking deals involving shamans and verbally abusing his horses and dropping their stakes when they disobeyed Kenney’s orders.

Since we are in the midst of calling out cheaters @BrynKenney and all his horses are basically forced to collude on GG esp in satties. “ do what’s best for the team” he wouldn’t let me play GG 5k plo events on my account but on party I could play 10Ks if said horse ghost was.

Zamani said “He22“ was among the bigger losers of Kenney’s deceptive practices. Roberts, a high-stakes amateur, played on GGPoker under that screen name.

Roberts said Kenney’s betrayal was clear – he acted as her mentor/coach during the games but at the same time, he had a stable of horses ready to gang up on her whenever she played. Roberts also bared that Kenney would persistently entice her to continue to play by offering her a freeroll even after telling him she wanted to take a break, something Roberts described as “abusive“.

While Zamani did not provide any evidence to prove his claims, Roberts’ recent tweets show there could be some truth to those cheating allegations.

After the accusations against him exploded on Twitter, Kenney was quick to refute the claims, saying there was no evidence of him cheating. He said he would address everything in detail but that has yet to happen.

Dear all of my friends and fans, there have been accusations made about me, the most important to me is me being involved in any type of cheating. There is zero evidence of this and everyone who knows me knows it is not true. I will be addressing this in more details shortly.❤️