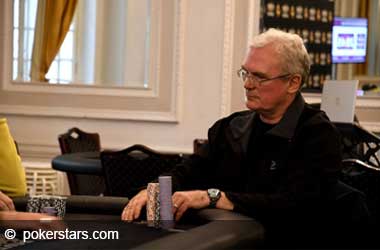 Barham topped a field of 468 players to take home £7,501 following a three-way deal. Barham, runner-up Justin Bateson, and third-placer Jay Yerby proceeded to play for the Platinum Pass, and when it was all said and done, it was Barham who came out on top.

Barham’s victory was made even more special as the final hand was dealt by the 2003 WSOP Main Event champion Chris Moneymaker.

During his interview, Barham said Moneymaker gave him a few tips on how to come out on top as he entered the final table.

Moneymaker’s advice was for him to avoid big pots and set his focus on playing small pots. But the PokerStars ambassador also reminded him to “keep the pressure on“. That advice proved effective as Barham was able to get the better of his competition. He will now be able to travel to Barcelona for the PokerStars Players NL Hold’em Championship (PSPC) in August 2020.

The final action kicked off inside PokerStars Live at the Hippodrome Casino with eight players competing for the top prize; Barham was holding the chip lead. The first player to be eliminated was Stephen Baker after his ace-eight lost out to Bateson’s ace-king. Not a bad result for the Brit though, as he was able to convert a small investment of just $7 into a £1,204 payout for his 8th place finish.

Subsequent action saw more players leaving the table in rapid succession. Simon Green left the table in 7th place for £1,727, Zayn Mushtaq followed Green to the rail in 6th place for £2,293, Alan Lambert earned £2,937 for his 5th place finish, while Ken Wong ended his bid in 4th place for £3,737.

The three remaining players then entered a discussion to chop the money and decided to continue playing for the Platinum Pass. After negotiating a deal, Barham was guaranteed to take home £7,501, Bateson took £7,298, while Yerby would walk away with £6,930 regardless of the outcome of the final battle.

Yerby eventually exited in 3rd place, leaving Barham and Bateson in heads-up play. That was when Moneymaker approached the table to act as the dealer. It took just one hand to make Barham’s victory official — both players got all of their chips in on the flop. Moneymaker gave Barham pocket kings against Bateson’s top pair. Bateson found no further help on the turn and river and Andrew Barham was then declared the winner.

The prize money might not be as gigantic as one would like, but the top award came in the form of the Platinum Pass which is worth €26,000 ($28,800), giving the winner a once-in-a-lifetime opportunity to take part in the PSPC, one of the world’s largest and most prestigious poker tournaments.