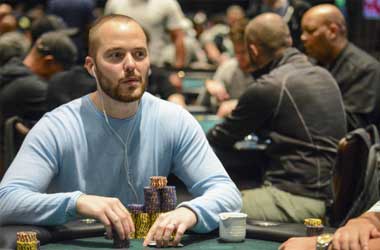 Sean Winter dominated the 2022 Poker Masters to walk away with the highly-coveted Purple Jacket and $50,000 in extra prize. The American poker pro surged to the top of the leaderboard late in the series after winning Event #9: $25,000 No-Limit Hold’em for $432,000.

Winter Believes Its His Destiny

Prior to being crowned overall series champ, Winter had some sort of a premonition regarding his performance at the festival. He had frequent sightings of the number sequence “7-7-7“, starting with a box truck bearing the name “Triple 7 Movers” during the opening day of the series.

The 31-year-old went on to see three sevens hitting the flop more than once during the festival. Every time he encountered the triple sevens, he would send a picture of it to his fellow pro and good friend Nick Schulman.

In the end, Winter earned $777,000 in total cash at the festival to emerge as the Player of the Series. Schulman couldn’t help but share on social media the amusing anecdote with images of the lucky sevens Winter sent him. The thread attracted plenty of fun reactions from the poker community.

Seen a lot but Sean Winter sends this truck pic day 1 of the poker masters. Alright lol. But then throughout the week says he keeps seeing 777 on the flop. Takes pics, talks about it every day lol. But just check out the last pic please.. pic.twitter.com/mO9y6QIgIn

Winter was nowhere to be seen on the leaderboard during the early stages of the series. He had not reached the money in the first six events, but the stars began to align in his favor when he placed second in the festival’s first $25K event where he won $345,000 and collected 207 points.

As the series drew to a close, Winter bagged his largest cash in the series after taking down the penultimate tournament – Event #9 – for $432,000. That victory earned him 259 points, enough to send him to the top of the leaderboard.

Jason Koon, who won the final event of the series for $666,000, finished second overall, followed by Schulman at no. 3.

Winter won a similar title earlier at the US Poker Open after securing back-to-back victories during the final stages of the series. After his great run at the Poker Masters, Winter’s live tournament earnings have now climbed to more than $22.9 million.