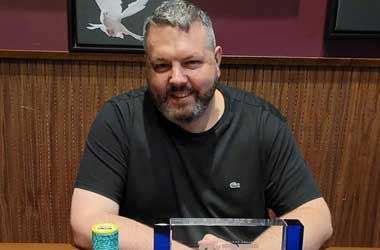 English poker pro Chris Johnson has won the 2022 Grosvenor Poker UK Poker Tour (GUKPT) Leeds Main Event. The £1,000 buy-in tournament pulled in a total of 430 entries to create £387,000 in total prize pool. Johnson emerged as the winner following a three-way deal, walking away with the first-place prize worth £73,070.

Jack Hardcastle, who won the 2021 GUKPT Leeds Main Event, fell short of defending his title after busting in 11th place for £5,200. Jessica Pilkington would have made history as the first female player to win a GUKPT Main Event had she made it till the end, but unfortunately, her run came to an end just before the final table, finishing 10th for £5,570.

The final table in the UK poker battle began with Johnson holding the chip lead. The first to leave was Richard Horton who lost an all-in battle against Ron Wilkinson. Horton collected £6,130 for his 9th-place finish. Wilkinson went on to eliminate Dean Lyall with pocket jacks versus queen-jack. Lyall finished 8th for £7,250.

Johnson scored his first elimination during seven-handed play when his ace-ten held against Matt Davenport‘s nine-eight, enough to send the English pro out in 7th place for £8,540. Next to go was Tony Fellone who was unable to crack Tom Laghzaoui‘s aces. Fellone finished 6th, taking home the first five-figure prize of the day worth £11,890.

Former Premier League defender Anthony Gardner moved all in with ace-queen of spades against the eventual winner’s pocket sevens. Gardner hit a flush draw on the flop but found no help on the turn and river to exit in 5th place for £16,350.

Mark Foggin entered the final table with a seven-figure chip stack but that would soon vanish after he lost all of his remaining chips to Wilkinson with king-six versus ace-king. Foggin earned £25,260 for finishing 4th.

The three remaining players opted to take a break to discuss a deal. Negotiations were successful, with each player guaranteed to win at least £57,880 regardless of the results. The trio decided to leave £9,300 for the winner.

Johnson Comes from Behind to Beat Laghzaoui

Wilkinson didn’t make it to heads-up play after his wheel straight ran into Johnson’s spade flush. He settled for 3rd place with £57,880 in winnings. Tom Laghzaoui didn’t win any extra cash either after Johnson came from behind to win the tournament with queen-nine against ace-eight. The Frenchman walked away with £67,020 as runner-up.