RunGood Poker Series To Return In 2021 With All Stars Theme

RunGood Poker Series To Return In 2021 With All Stars Theme 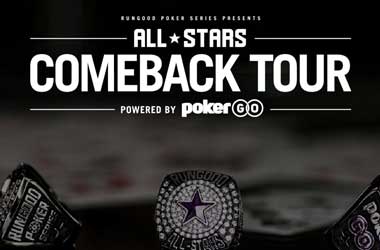 The original plan was to host qualifying events throughout the season, leading to a “Pro-Am” tournament which would see amateurs and invited poker pros battle it out at the live tables, with the action to be streamed by PokerGO.

Now, the popular tour intends to proceed with its 2020 “All Stars” theme and has released a new schedule for the stops.

The series will kick off at Jamul Casino on the outskirts of San Diego on June 8, running through June 13. The second stop will be at Horseshoe Council Bluffs in Iowa, and it will run from June 22-27. After that, the series will then drop by Horseshoe Tunica in Mississippi from July 6-11.

As usual, players will enjoy five days of poker action and other fun activities off the felt, one of the reasons why RunGood has become such a hit among US players and fans. It was named Mid-Major Tour/Circuit of the Year during the 2020 Global Poker Awards.

So far, the tour has announced three stops, and more will be added in the months ahead, assuming restrictions are finally lifted across the US. Players at each stop can expect a wide range of events, headlined by a $575 buy-in, $100,000 GTD Main Event which features three Day 1s. Every stop also has a dedicated leaderboard, giving players the chance to win extra prizes.

The Main Event winner, as well as the top finisher on the leaderboard will both earn automatic entry into the Pro-Am event which will take place in December.

The 2020 season of the RunGood Poker Series, “RGPS: All-Stars Presented by PokerGO“, managed to kick off successfully before COVID-19 got in the way. The full schedule originally featured a total of eight stops, with the action getting underway at Horseshoe Iowa in February. The tour was eventually put to a halt after half of the events had played out, but those who already qualified for the season-ending Pro-Am tournament will still retain their seats.

The RunGood team will now pick up where they left off, continuing their partnership with PokerGO. Both began working together in 2019 during the “Showbound” season. During that year, two winners form the RunGood tour each earned a $5,000 seat to Poker After Dark.