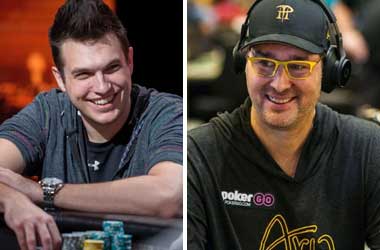 Phil Hellmuth continues to attract prominent challengers in heads-up poker. This time around, Doug Polk has officially thrown down the gauntlet, putting $1 million on the line to face “The Poker Brat“.

The challenge comes as Hellmuth enjoys a 2-0 victory against Daniel Negreanu in their ongoing battle on PokerGO’s High Stakes Duel.

Earlier this year, Negreanu lost $1.2 million to Polk after a marathon heads-up grudge match which lasted for three months.

After his grudge match against Negreanu which concluded back in February 2021, Polk said he would no longer be accepting heads-up challenges going forward. But the Upswing Poker founder has since changed his mind. In late April, he played $200/$400 heads-up No-Limit Hold’em online against Bill Perkins. The late night battle saw Polk smashing the hedge fund manager for a cool $250,000.

Now, Polk is targeting Hellmuth and is putting up $1 million of his bankroll to sweeten the offer. If Hellmuth eventually agrees to the challenge, both will play 25,000 hands of 200/400 HUNL, two tables, 100bb. The Poker Brat won’t be spending anything to participate in the match, but if he wins, he’ll take home $1 million from Polk, as indicated in the latter’s recent tweet.

I'll put up a free 1 million dollars if you win.

Polk who is now residing in Austin, Texas USA after leaving Las Vegas, is considered one of the best heads-up poker players in the world. His accomplishments in the game cannot be ignored – he has three World Series of Poker (WSOP) bracelets, with nearly $9.5 million in total live earnings (that record does not include the millions he won playing online).

In 2018, Polk announced his retirement from the game, saying he no longer enjoyed it. He has since stayed away from live poker tournaments, but in 2020, he gave the game another shot when he agreed to face long-time rival Negreanu in one of the greatest HU matches in poker history. Now, it appears like Polk isn’t ready to leave the game for good just yet.

No Response Yet From Hellmuth

A potential match against Hellmuth will again generate significant attention, with thousands of poker players and fans definitely looking forward to watching another legendary HU battle. But will Hellmuth accept the challenge?

Well, the 15-time WSOP bracelet winner is currently concentrating on his ongoing heads-up match against Negreanu. The duo are set to face each other for a third time on High Stakes Duel, with the pot now growing to $400K.

Hellmuth is used to playing in the sit-n-go style format, hence it wouldn’t come as a surprise if he eventually decides to turn down Polk’s offer. Playing 25,000 hands of 200/400 HUNL would require a completely different approach, and Polk certainly has the edge, but who knows, Hellmuth might give it a try to prove that he is the GOAT of poker!