Casino Sochi Gets Ready For A Welcome Russian Invasion

Casino Sochi Gets Ready For A Welcome Russian Invasion

Casino Sochi Gets Ready For A Welcome Russian Invasion May 19, 2021 Mario Alfonsi 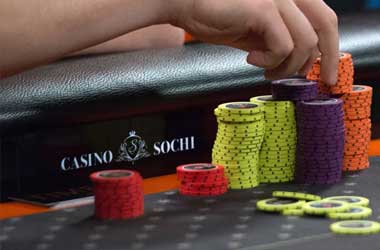 Russia’s live poker scene continues to be busy this year with upcoming events on its poker calendar. Casinos operating at the country’s gambling zones have been running games, including poker, as early as July 2020, in line with the easing of COVID-19 restrictions. Among the most popular spots for poker action is Casino Sochi, which over the past few months have played host to multiple tournaments.

Back in February, World Poker Tour (WPT) Russia took place at Casino Sochi, running 14 events for over a week. The festival ended up attracting over 1,700 players, with almost $2 million in prize money awarded to winners.

The following month, Casino Sochi partnered with PokerStars Live for the European Poker Tour (EPT) which took place from March 21 to 28. The venue has been the Russian home of the EPT Main Tour since 2018.

Apart from the WPT, the EPT, and PokerStars, other major poker brands have also chosen Casino Sochi as the venue for their massive tournaments. Among them are 888live, Poker Central and Triton Poker. In the next few months, the casino will host more events, beginning with the Sochi Poker Festival in June.

It will then be followed by the 888poker LIVE Sochi festival which will run from July 17 to 26. Players can take part in satellites to the big events on the series via the 888poker global client. The festival will be headlined by the Main Event which has a buy-in of RUB62,160 ($888). Another key tournament on the schedule is the 888live Sochi Cup which will run from July 17 to 21.

The WPT is also planning to bring its popular mid-stakes tournament, WPTDeepStacks, to Casino Sochi in August, though the tour has yet to release an official schedule. The Sochi Poker Festival is also set to return in September.

All of these international events are organized and facilitated by Poker Club Management (PCM), a Moscow-based poker company owned by Artur Voskanyan. Since 2017, Voskanyan and his team have been organizing major poker festivals including PokerStars EPT, partypoker MILLIONS, and WSOP Circuit.

The full details and schedule of upcoming events can be found at the Poker Club Management website.