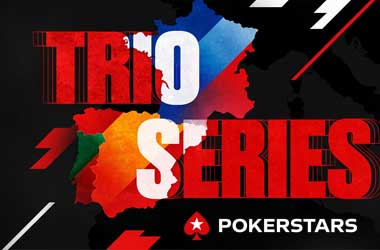 PokerStars is continuing its MTT momentum with another major festival, this time in Southern Europe!

The world’s largest online poker site will heat up the virtual felts across France, Spain, and Portugal as it hosts the TRIO Series from May 23 to June 6.

This comes on the heels of the hugely successful Spring Championship of Online Poker (SCOOP) which ran from April 4-28 and featured a record-breaking $100 million in guaranteed prize money.

The TRIO Series is exclusive to players in the French, Spanish, and Portugal markets which are currently under a liquidity sharing agreement. Players will compete for €7 million in guaranteed prizes spread out across a total of 191 tournaments, with buy-ins starting at €3. The series will culminate in a €250 buy-in Main Event which comes with a €500,000 guarantee.

The first-ever TRIO Series took place in 2018 shortly after the previously segregated markets of France, Spain, and Portugal agreed to merge their pools.

The inaugural series exceeded expectations and ended up attracting 40,816 entries across 78 events, generating more than €5.8 million in total prize pool (surpassing its initial guarantee of €5 million). The festival returned for a second edition in 2019 with the guaranteed prize money being upped to €7 million.

In 2020, as online poker enjoyed a “mini boom” in the middle of the COVID-19 pandemic, PokerStars ran the TRIO Series with a massive €10 million guarantee!

This year, while the guarantee is down to €7 million, players will have plenty of events to choose from, available in low and mid-stakes. PokerStars will also be running phased events to accommodate as many players as possible and ensure that everyone can take part regardless of their bankroll.

This year, the live poker scene is back in action, and while a number of restrictions are still in effect across Europe, casinos have now been allowed to resume their operations.

Poker rooms in France, Spain, and Portugal in particular have reopened their doors over the past few weeks. This will most likely lead to a decrease in online traffic, which could result in a potential drop in participation numbers for the upcoming TRIO Series.