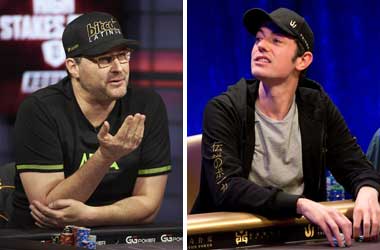 High Stakes Duel III – Round 2 featuring Phil Hellmuth and Tom Dwan is just around the corner. Tom Dwan is Hellmuth’s latest heads-up opponent and they are set to kick off their battle on August 25, at the PokerGO Studio in Las Vegas.

The highly anticipated match between two of poker’s elite players is finally taking place after sports broadcaster Nick Wright opted not to call for a rematch following his defeat against Hellmuth in Round 1.

As usual, whoever ends up losing the poker game will have the choice to request a rematch and will need to pay another $200,000 to get into Round 3. The money at stake continues to grow with each subsequent round until somebody concedes defeat.

The Poker Brat currently enjoys an impressive 7-0 record on the show. He won all of his three matches against Antonio Esfandiari, and then went on to defeat Daniel Negreanu across three consecutive sessions. Hellmuth came in as the underdog during those first six matches but managed to score an upset.

The only time The Poker Brat was highly favored to win was when he took on Wright. Not surprising, as the sports talk show host is essentially an amateur player with no relevant poker background.

Now, despite his 7-0 record, Hellmuth is again the underdog in his upcoming battle against Dwan. Poker betting platform PokerShares puts Dwan as a -128 favorite, which means that a $128 bet would turn a profit of $100 if he eventually wins. A $100 bet for Hellmuth would net a $110 profit, should he remain undefeated after the match.

Duel 13 Years In The Making

Some poker fans may not know that Hellmuth and Dwan have some unfinished business. In 2008, both players faced each other in the first round of the NBC National Heads-Up Poker Championship. Hellmuth had already established a legacy, having been inducted into the Poker Hall of Fame in 2007.

Dwan, who primarily played high-stakes games online, had only begun his live poker journey, but he managed to outclass Hellmuth, cracking his aces with pocket tens. That hand resulted in one of Hellmuth’s most unforgettable meltdowns, where he trash-talked Dwan and disrespected his play. Offended, Dwan challenged Hellmuth to a rematch but that did not materialize.

Now, both players can finish what they started, in what is expected to be an epic heads-up battle between two poker greats.