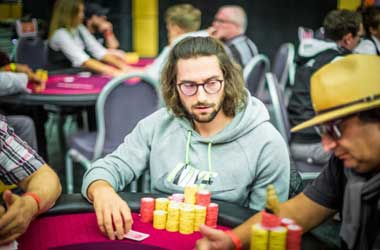 The Malta Poker Festival Grand Event has finally concluded and it was Lithuania’s Tomas Sujeta who came out on top of a huge 1,324-entry field to capture €150,000 as the first-place prize, his best live tournament score to date.

Sujeta defeated Israeli player Dmitri Dan in a fairly quick heads-up battle at Club Twenty Two of the Portomaso Casino in St Julian’s, to win the second edition of the Grand Event which generated a total prize pool of €642,140. Dan, who was the chip leader on Day 2 and Day 3 of the event, also took home a career-best cash of €82,000 as runner-up.

Eight players battled it out at the final table, with the most experienced player among the bunch, Dario Marinelli, coming in with the shortest stack. The Italian player eventually became the first to fall after running with pocket queens into Pasquale Gregorio‘s pocket kings. Marinelli earned €14,000 for his 8th place finish.

Dutch player Peter de Bruin was the next to go after shoving eight-seven suited against the jack-ten of Leendert Marcus. The latter picked up trips on the river, sending his fellow countryman to the rail in 7th place for €20,000. Sujeta was responsible for the third elimination of the day, flopping a straight against Gregorio’s middle pair. The Italian pro found no further help on the river and left the table in 6th place, winning €26,000.

With five players remaining, Oskar Wedde got all of his chips in with ace-nine against Craig Smith‘s ace-queen. Wedde’s cards improved to flush during the turn, but the river was a total bick, ending the Norwegian player’s bid in 5th place for €32,440. Marcus was the next to hit the rail after shoving his ace-nine into Dan’s ace-queen. Marcus collected €38,000 for finishing 4th — a good result for the Italian player who originally did not plan to take part in the event.

Smith eventually fell after calling Sujeta’s the shove on the river. Smith had two pair, but the eventual winner held a straight, sending the UK player out of the game in 3rd place for €48,000.

Tomas Sujeta then entered heads-up play against Dan who was striving to regain his position. The final match did not last that long. The Israeli player flopped a full house and then check-shoved the turn holding a flush draw and gutshot straight draw. Sujeta called and turned a straight leaving Dan helpless on the river, and ultimately capturing the top prize.