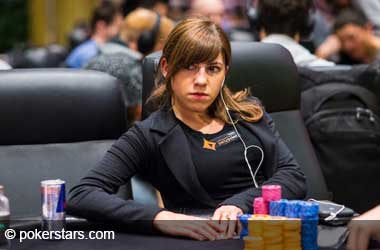 Kristen Bicknell emerged victorious in Event#6: $25,000 No-Limit Hold’em at the 2019 Poker Masters which is currently underway at the PokerGO studio in Las Vegas. Bicknell outclassed a 51-entry field to capture a career-defining score of $408,000.

The sixth event of the series attracted some of the best players in the game, including Stephen Chidwick, Jeremy Ausmus, Sean Winter, Manig Loeser, Nick Schulman, Byron Kaverman and Erik Seidel, all of whom failed to finish in the money.

American poker pro Chance Kornuth has remained unsuccessful in his bid to become a Poker Masters champ after losing to Bicknell heads-up for $267,500. Kornuth now has three runner-up finishes in the series, the first one was in the $10,000 hold’em event which was won by Isaac Baron, the other was in the $10,000 pot-limit omaha where he lost to Ryan Laplante.

Eight players made it to the final table after American poker pro David Peters became the bubble boy, exiting in 9th place. Fellow American Elio Fox was the first to receive some cash, after losing his ace-five against Kornuth’s ace-jack. Fox collected $51,000 for his 8th place finish. David Stamm suffered a quite similar fate, three-betting all-in with ace-five against Kornuth’s ace-jack. The latter’s jack kicker held, and Stamm ultimately busted in 7th place for $63,750.

Ben Heath was the next to fall, hitting the rail in 6th place after running kings into Andras Nemeth‘s aces. The British pro earned $76,500 for his efforts. Kornuth went on to eliminate Ralph Wong in 5th place for $102,000.

With four players remaining, Kornuth was holding a massive chip lead, and widened the gap even further after sending Nemeth to the rail with pocket fives against the Hungarian’s ace-three. Nemeth won $127,500 for finishing in 4th place. During this time, Kornuth was 6:1 in the lead against his two remaining opponents. Ali Imsirovic was the next to leave and ended up in 3rd place to take home $178,500, setting up heads-up play.

Kornuth was still in a 2:1 advantage during the one-on-one match against Bicknell, but the Canadian pro managed to win an all-in battle with pocket sixes against her opponent’s Q-9, effectively overtaking the chip lead. The final hand saw both players getting all of their chips in the middle, with Kornuth leading the race with pocket nines against Bicknell’s pocket eights. But Kristen Bicknell picked up a straight on the river to make her victory official.

Even though Kornuth failed three times to secure the top prize, he is still in a good position to win the much-coveted Purple Jacket, as he is currently leading the 2019 Poker Masters Championship standings.