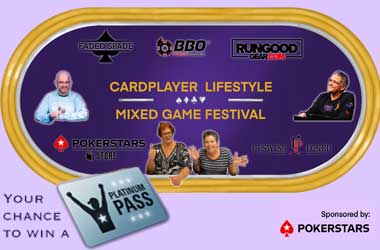 PokerStars ran a massive Platinum Pass promotion in 2019 and 2020 to promote its PokerStars’ Players No Limit Hold’em Championship (PSPC). The inaugural event took place in 2019 and was a big success.

PokerStars scheduled the 2020 PSPC to take place at Casino Barcelona in Spain but had to cancel the tournament due to the COVID-19 outbreak.

The 2021 PSPC was also scheduled to take place at Casino Barcelona but was cancelled indefinitely due to concerns over COVID-19.

Since then there has been no news about a Platinum Pass or whether a 2022 PSPC was on the cards. The online poker community is once again talking about the $30,000 Platinum Pass package which includes a seat to the $25,000 PSPC after the Cardplayer Lifestyle’s Mixed Game Festival in Las Vegas announced that the winner will get a Platinum Pass.

The Mixed Game Festival is set to take place at the Westgate Casino in Las Vegas and run from Oct 4 to 7. Festival organizer Robbie Strazynski said he planned this mixed games festival for a long time and was about to launch it in March 2020 but the pandemic hit and he shelved the idea.

Strazynski who loves playing mixed games believe this is the right time to launch his Mixed Game Festival even though the 2021 WSOP will be taking place at the Rio in Las Vegas at the same time. The $30,000 Platinum Pass giveaway will be added incentive for poker players to take a break from the WSOP and check out the mixed games festival.

The first three days of this tournament will feature non-stop cash game action based on the dealer’s choice. On October 7, the action will conclude with a $200 buy-in H.O.R.S.E tournament and the winner will take home prize money along with the Platinum Pass.

PokerStars is yet to release any official information on whether there will be a PSPC in 2022. If PokerStars does proceed with the 2022 PSPC will it take place at Casino Barcelona or be held in the United States. We will bring you more updates on this as news breaks.