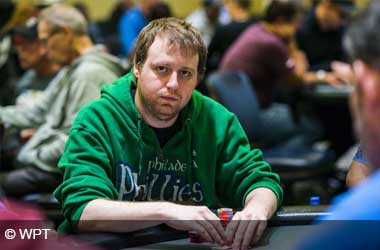 McKeehen walked away with $352,985 as top prize after defeating Frank “thewholefunk” Funaro in heads-up play. The runner-up earned $219,089 for his efforts.

McKeehen, a native of North Wales, Pennsylvania, is now officially a three-time bracelet winner, having won his first two bracelets in 2015 and 2017 respectively. He joins the ranks of Lyle Berman, David Reese and Dewey Tomko, all of whom had been inducted into the Poker Hall of Fame.

David “newjerz05” Jackson became the first player to leave the final table after his king-queen ran into the pocket aces of Lee “SoccerDJ” Vlastaris. Jackson finished eighth for $28,951. He was followed to the rail by Nathan “innate9” Russier, who claimed the 7th spot for $38,601.

The final table kicked off with Clayton “nevarlucky” Maguire holding the chip lead. Maguire, an online bracelet winner himself, was aiming to create history as the first player ever to win two online bracelets. But that didn’t happen, as he eventually exited in sixth place for $52,624, after losing a hand against Funaro with jack-three suited against ace-seven.

The next player to bust was Vlastaris after their jack-ten lost to Funaro’s ace-three. The player earned $72,979 for his fifth-place finish. The eventual runner-up went on to eliminate Roland “prngls12” Israelashvili after winning a race with pocket sixes against the latter’s ace-nine. Israelashvili finished third for $148,975, his second final table at the ongoing series. The American poker pro now has 230 WSOP cashes throughout his career, but a bracelet has remained elusive.

The entire battle had been a test of patience and determination for McKeehen. He never eliminated an opponent until the heads-up battle, and he faced Funaro as the underdog with almost 6 million in chips separating them. Equipped with experience, McKeehen managed to turn things around and eventually grabbed the lead. When the final hand was dealt, McKeehen called Funaro’s seven-six suited with ace-nine. And that was it for Funaro.

The 2020 WSOP Online Bracelet Series continues on WSOP.com until July 31, and so far, more than a dozen players have already been awarded the highly-coveted gold bracelet. GGPoker has also begun to host the first of the 54 online bracelet events scheduled to take place at the online platform until September 6.

Dan Bilzerian To Promote Online Poker In India With “Blitz ...