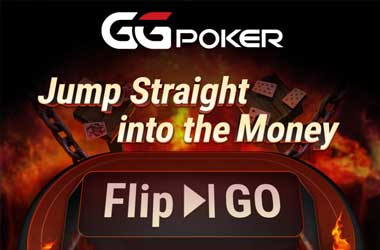 GGPoker’s latest game offering Flip & Go is proving popular among players, both amateurs and pros alike. The operator unveiled the unique poker tournament variant just last month, and less than two weeks after the launch, an upgrade was quickly introduced with the addition of a new rake-free tournament.

Flip & Go adds a twist to the usual tournaments by allowing players to jump straight into the hottest action, taking them right to the money portion of the tournament.

The fast-paced action involves two stages — players first engage in flipout action and then proceeds with normal tournament play right after. The concept has attracted even the site’s ambassadors, Fedor Holz and Bertrand “ElkY” Grospellier.

The top pros recently shared their thoughts about GGPoker’s most recent MTT innovation and why they’re both attracted to it.

Both Holz and Grospellier agree that being able to jump directly into the climax of the tournament is Flip & Go’s main attraction, and while there are a few twists along the way, players won’t find it difficult to fully grasp the concept.

Grospellier describes it as the “perfect game” as it gives all players, whether beginners or experienced pros, a good chance at winning quickly. Holz added that the concept is quite easy to understand, and that is why the game is a huge hit, especially among casual players.

Flip & Go players would want to learn the best way to succeed in playing the new variant, but Grospellier said the strategies aren’t very refined yet, considering that the game is still in its early stages.

For now, players can improve their chances of winning in the flipout phase by checking which opponents’ cards are already dead. It also helps to sometimes let go of the high card as there are instances where some connected hands or suited do better when it comes to multi-way all-ins, according to Holz. Grospellier also advises players to look for the outs when deciding which hand to go for.

When the action shifts to standard tournament, Holz’s tip is to play a solid style and not get too out of line.

GGPoker has always been committed to bringing the fun back in poker, and both Holz and Grospellier agree that the operator is able to honor that commitment by coming up with game offerings such as the Flip & Go MTTs. To know more about the game, visit the GGPoker website.