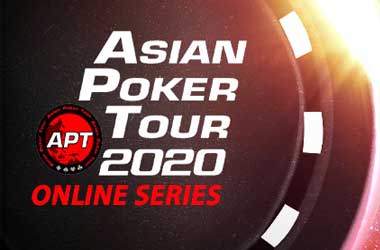 After a successful inaugural event in May, the second edition of the Asian Poker Tour (APT) Online Series is set to kick off this weekend.

Taking place from June 14 to 28, the poker festival will award $10 million in guaranteed prize money, making it the largest-guaranteed Asian tournament to be hosted by the GGNetwork.

The schedule is jam-packed with over 200 events; six of them will give away an APT trophy to the eventual winner. In addition to that, Natural8 will run a dedicated leaderboard, with $10,000 in extra prizes up for grabs.

The top three players in the race will win an APT Player of the Series ring, plus an additional cash of up to $1,500.

The main highlight of the festival is the $500 APT Main Event which features a massive guarantee of $1,000,000 plus ring and trophy. It takes place on June 21, alongside a $5,000 buy-in Super High Roller event which will also award an APT trophy. A Mini Main Event with a buy-in of $50 is also scheduled for June 14.

Players can also choose from a wide variety of side events throughout the festival, featuring different formats such as Progressive Bounty, Deep Stack, Turbo, Micro Turbo, Deep Stack Hyper Turbo and Monster Stack. If you are not available to play, you can still get yourself involved by buying some pieces of action through Natural8’s integrated staking system.

The festival follows on the heels of the inaugural online series which ended up awarding over $4.1 million in prize money across 62 events, with all the winners also walking away with an APT trophy. The series debut drew a total of 18,555 entries, and the biggest slice of the total prize pool ($578,075) went to the $500 buy-in Main Event.

Michael “DirtyDuck” Falcon emerged as the biggest winner of the festival after taking down the $800 APT Championships, defeating a field of 753 entrants for a top prize of $97,445. He also topped the APT Player of the Series leaderboard.

For the full details and schedule of the second edition of the APT Online Series, visit the APT & Natural8 websites.