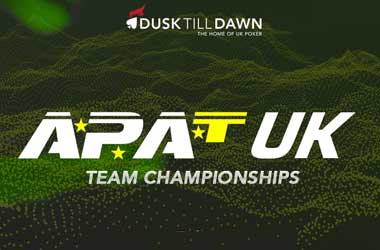 The Amateur Poker Association & Tour (APAT) is returning to live action with the UK Team Championship hitting the felts at Dusk Till Dawn from February 11-13.

Around 35 teams will compete in the 2022 edition of the popular team championship event which carries a prize pool of £28,000.

A total of 35 teams are competing this year, comprised of eight members each, including the team captain. The participating teams each paid £120 as entry fee. The top five teams as well as the top nine individual players will win a share of the £28,000 prize pool, with the top three teams also taking home gold, silver, and bronze medals.

The UK Team Championship was last held in 2020 just before COVID-19 wreaked havoc across the globe. The 2021 edition had to be dropped over health and safety concerns.

“Two and a Half Nits” were declared the 2020 champions, with Haydn Campbell, Farhan Ahmed, Paul Jackson, David Tyler, Patrick Clouden, Jordan Gillard and Matthew Gillard each walking away with £875.

Defending champion “Two and a Half Nits” is competing again this year, alongside Clark’s team, the “East Herts Poker League“.

The schedule also includes three side events – a Bounty Hunter event on February 11, and two No-Limit Hold’em tournaments running on the 12th and 13th. However, not everyone will get the opportunity to play in these events as they come with a strict player cap. The Bounty Hunter event has a limit of just 252 players, while the two NLH tournaments are capped at 108 and 135 players respectively.

Those keen on taking part in the three side events can pre-register using the Luxon Pay app or buy-in directly during the actual day of the event. APAT will accept players on a first-come-first-served basis.