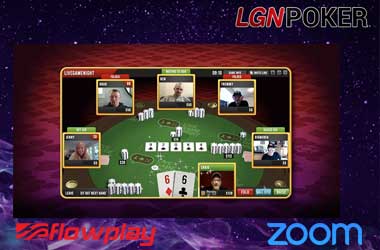 Zoom is offering its users a new way to connect with each other. The video teleconferencing platform just launched “Live Game Night Poker” (LGNPoker), a Texas Hold’em game that utilizes video technology to allow players to engage in virtual face-to-face gameplay.

The game was created by Seattle-based social games developer FlowPlay and is now available in the Zoom App Marketplace.

LGNPoker is a play-money game, but players can elevate the fun by purchasing avatars and other in-game digital items.

To enjoy the game, you must first download the app via the Zoom Marketplace. Take note that the game only works mobile phones with the downloadable version of Zoom on . You won’t be able to play it on a browser-based platform.

You can tell if you’ve successfully downloaded the app as it will quickly appear under My Apps on Zoom. After downloading the app, you may proceed with inviting your family, friends, or colleagues to join you in the game by giving them the URL or room code, similar to how it’s done when you invite someone to a Zoom meeting.

Once everyone is in, you can now launch the game by clicking on Apps and selecting “LGNPoker“. You can then configure the game options as host.

Upon completing the set up process, all participants will automatically be taken to the poker room and the game begins.

You can play both cash games and tournaments on the app. For cash games, you can choose between six-handed and ten-handed, played as either No-Limit Hold’em or Limit Hold’em. You may also set the buy-in and blinds.

Similarly, you can play tournaments at either six-handed or 10-handed tables. As host, you also get to select the number of starting chips, the ante, small, and big blind, as well as the duration of each level.

The app has a dedicated store where you can buy avatars and other virtual items to make the experience more fun and exciting. There are two currencies available – gems and room cards. Gems can be purchased using cash. You can then use the gems to buy avatars or room cards.

Live Game Night Poker was specifically designed for the pandemic, as people got stuck in their homes. According to FlowPlay, the game was completed last summer but they struggled to find an audience for it. When they presented it to Zoom, the video platform was impressed and felt it would be a perfect fit for its users.