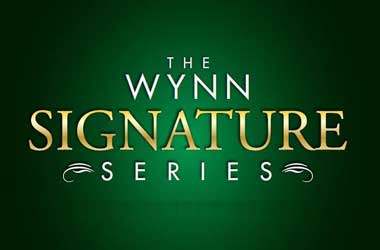 The Wynn Signature Series is returning to Las Vegas next year! The tournament will be among the first major live poker festivals to take place in 2020, offering a massive $1.3 million in guarantees. The luxurious Wynn resort and casino in Las Vegas will host the action from January 15 – February 2, 2020.

The main highlight of the 2020 Wynn Signature Series is the $1,100 buy-in No-Limit Hold’em Event taking place on January 23-26, where players get the chance to win a share of the massive $400,000 in guarantees.

The event has three starting flights which are scheduled to run on January 23-25. Players begin with 25,000 chips, played in 40-minute levels. Survivors will meet again on the final day on January 26, during which a winner will be crowned.

Wynn is also giving players the opportunity to take part in the $400,000 GTD event at a lower price by running two Super Satellites which require just $200 as entry fee. The two satellites will take place during Day 1A and Day1B of the massive event.

A similar event also took place during the Wynn Fall Classic in October this year. Phoenix native Sanket Desai came out on top of a 473-entry field to take home the lion’s share of the prize worth $70,306. The other players who walked away with a slice of the $463,162 in guaranteed prize pool included Eric Blair (2nd), Eric Baldwin (3rd), Tamas Lendvai (4th) and David Jackson (5th).

Right after the $400K guaranteed event, another $200K GTD event is set to take place, with a buy-in of just $600. It will also feature three starting flights running on January 27-29.

An event of the same size took place at the Wynn earlier this year, which saw Brett Shaffer walk away with the top prize of $39,000 after a five-way deal with Tuan Mai, Tom Middleton, Tim McDermott and Nick Jivkov. The event attracted a total of 599 players to generate a $313,396 prize pool.

While the schedule for the upcoming tournaments features mostly No-Limit Hold’em events, there are other variations available, including the $40K GTD opening event on January 15 which takes a survivor format. It carries a buy-in of $400. The following day, a $300 Limit Omaha Hi-Low 8-or Better will also take place, with $20,000 in guaranteed prize pool on offer.

The same guarantee is also up for grabs at another Omaha tournament featuring a buy-in of $400, on January 21. For the full schedule of the tournament, do check out the Wynn website.