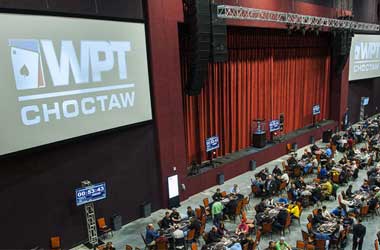 Two US Poker events have so far been ticked off the 2022 World Poker Tour (WPT) schedule and both events, which were held in South Florida, were a massive success, attracting large fields. Next week, all eyes will be on Durant, Oklahoma as the WPT returns to Choctaw Casino Resort for its third stop of the year.

WPT Choctaw runs from May 13-16 and features a buy-in of $3,800. The tournament will be paused once the six-handed final table is reached, with the action resuming on May 26 at Luxor’s HyperX Esports Arena where a winner will be crowned.

Players can enter via two starting flights running on May 13 and 14.

WPT Choctaw is one of the tour’s most popular stops well-known for attracting massive fields each year and 2022 is no different. A huge number of players are expected to flock to Choctaw Casino next week to take a shot at the huge $1 million guaranteed prize money.

The tour returned to the venue in April for the WPT Seminole Hard Rock Poker Showdown which pulled in 2,010 entries. The tournament has yet to crown a winner as the final action will also take place in Las Vegas a few weeks from now.

All-time WPT title leader Darren Elias leads the final table of six players. He’ll try to score his fifth Main Tour victory and extend his WPT record when play resumes on May 25. If he achieves that, he’ll walk away with more than $1 million as top prize.

After Choctaw, the tour will head over to The Venetian Resort in July for the $5,000 buy-in WPT Venetian Las Vegas.