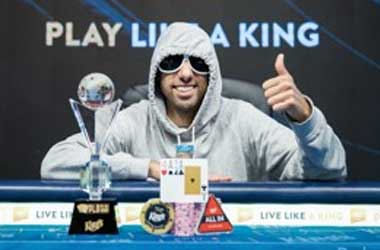 Turkey’s Adon Ursu was crowned the winner of the largest Pot-Limit Omaha tournament in Europe.

He topped a field of 474 entries and defeated Veton Raka of Kosovo heads up in The Big Wrap, which took place at the King’s Casino and Resort in Rozvadov. Ursu earned €200,000 ($222,986) for his first place finish.

Despite minor setbacks in the initial stages of the game, Ursu managed to navigate his way to the top, sending several opponents to the rail. When it came to the final three tables, Ursu stumbled and went down in chips at one point, but he was able to reclaim his position and ultimately crushed his opponents to take home the trophy.

Hometown favourite Martin Kabrhel began the final day holding the chip lead against 27 other players. But his dominance did not last long and he eventually left the table after getting it all in with kings against Sergey Verkhoturov‘s aces. Kabrhel, winner of two WSOP bracelets and five Circuit rings, had to settle for 22nd place, walking away with €8,750.

The final table kicked off with Poland’s Pawel Keller in the lead. Ursu then sent Turkish pro Victor Nalim to the rail in 8th place for €23,260. Keller was the next to leave taking home €32,250 for his 7th place finish. Lithuanian hero Borritoo provided some of the most exciting action in the game, going up and down in stack and getting some sort of a lifeline whenever everyone thought he would finally leave the table. He was able to eliminate Germany’s Han Kuo in 6th place for €43,400 and extended his run.

Russian player Sergey Verkhoturov fell in the hands of Ursu, busting in 5th place for €56,300. While Borritoo initially got away with elimination, his fate was finally sealed when Ursu was able to counterfeit him on the river. The Lithuanian pro took home €71,200 for finishing 4th.

The final three players at the table were Ursu, Raka and Poland’s Tomasz Kozub. Ursu and Raka’s aggression was notable as the game progressed, with Kozub eventually hitting the rail in 3rd place after Ursu turned a straight flush against the Polish player’s straight draw. Kozub walked away with €88,000 for his efforts.

Ursu’s victory was made official when he got it in with aces against Veton Raka’s pair and straight draw. The Big Wrap gave Ursu his biggest cash to date.