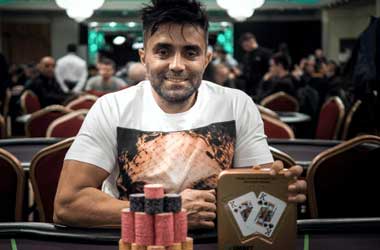 Romanian poker player Adrian-Eugen Constantin will not forget the 888poker LIVE Festival which took place at the Aspers Casino in Westfield Stratford City. He used a €33 satellite event to gain entry into the £1,100 Main Event which he went on to win and take home a top prize of £100,000.

Constantin who came out on top of a 518-entry field spent over 14 hours on the final day to run through the competition and take home a 6 figure payday along with a package for the 2020 World Series of Poker (WSOP) Main Event worth $12,500.

Constantin was among the shorter stacks when the final table kicked off, but the Romanian player managed to stage a huge comeback which led him to an exciting heads-up battle against the UK‘s Leon Louis.

Nine players made it to the final table, with Constantin and Louis being the bottom two stacks. The first to bust was British player Bhavin Khatri who finished ninth for £10,000. Louis was responsible for the next two casualties, first sending Spain’s Jose Echevarne Gomez to the rail in eighth place for £13,280 and then eliminating Valdir Cordeiro dos Santos of Brazil who collected £16,660 for his seventh place finish.

Russian player Nikolay Ponomarev finished in sixth place and took home £20,100. During this time, Constantin was running hot, accumulating chips via massive three-bets which helped build his confidence. UK’s Aleksandrs Golubevs who was unable to survive an all-in battle with Egidijus Alsauskas walked away with £24,920 for finishing fifth.

With four players remaining, Constantin managed to take the lead, while Alsaukas saw his chip count decline. The Lithuanian player eventually fell after losing a hand against Louis. He exited in fourth place for £33,230.

The final three players tried to reach a deal but in the end decided to play on. Constantin asserted his dominance and finished off Manuel Bueno who settled for third place.

Biggest Win Of His Career

The heads-up battle between Constantin and Louis was full of twists and turns, with the Romanian stuck on the ropes on several occasions despite starting with a 4:1 chip advantage. At one point, Louis managed to pull off a staggering 14:1 lead, but Constantin was all for the win and eventually regained his position.

He got a straight on the river, beating his British opponent’s two pair which saw him come out on top. This was the biggest win of Constantin’s career. Leon Louis took home £69,770 ($90,194) as runner-up.

For more 888poker tournaments and latest promotions why not visit our review here, where we tell you why you should try this poker room.