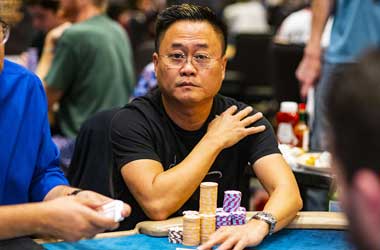 The World Poker Tour (WPT) crowned its newest winner this week. Qing Liu emerged victorious in the WPT Main Event at the Venetian in Las Vegas for $752,880.

He managed to overcome a 2:1 chip deficit to defeat three-time World Series of Poker (WSOP) bracelet winner Joe McKeehen during heads-up play, ultimately securing the title. The $5,000 buy-in Main Event took place as part of the ongoing WPT at Venetian DeepStack Showdown Poker Series in Las Vegas which got underway on March 1 and will run through March 29, 2021.

It marks the tour’s return to the city since December 2019. The Main Event, which lasted five days, from March 5-9, attracted 937 entries to generate over $4.3 million in total prize pool.

Six players returned on Tuesday for the final table, which lasted 175 hands. Liu was responsible for the first elimination of the day, sending Trace Henderson to the rail in 6th place for $155,865 after winning a flip with queen-ten vs. pocket nines. The next to go was Kou Vang, courtesy of McKeehen. Vang, an MSPT Hall of Famer, lost his Big Slick against the pocket eights of McKeehen. He finished 5th for $204,430.

Hand #94 saw Jack Hardcastle exiting in 4th place, after his queen-eight was defeated by McKeehen’s king-ten all in pre-flop. Hardcastle’s efforts earned him $271,050. The 2015 WSOP Main Event champion went on to eliminate Roland Rokita, his jack-eight rivered an eight to defeat Rokita’s pocket fives. Rokita settled for 3rd place with $363,235 in winnings.

McKeehen faced Liu heads-up with a 2:1 chip advantage, but the eventual winner ran hot during the early stages of action, winning three of the first four hands to grab the lead. When the dust settled, it was Liu who won the most number of hands during the one-on-one match, 18 out of 23.

During the final hand, McKeehen put all of his remaining chips in the middle with king-seven. Liu called with king-four, and McKeehen was initially ahead. But Liu flopped a four and his opponent failed to find help on the turn or river. McKeehen fell short of winning his first WPT title. He finished second for $491,960.

Liu was also among the finalists of the WPT Gardens Poker Championship. When asked whether he could win two WPT titles in a row right after his victory at the Venetian, the American poker pro said he wouldn’t be as lucky.

Liu’s statement came true two days after, as he was the first player to be eliminated during the WPT Gardens Poker Championship final table which took place on March 10. He finished 6th for $111,795. Still, Liu has had a nice run at the tour, and winning his first WPT title is already a massive accomplishment.