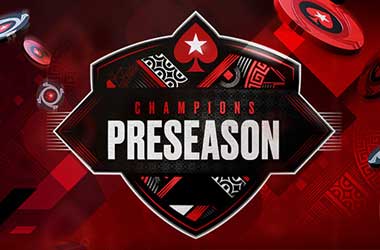 PokerStars is running a “Champions Preseason Series” across all of its three US sites in preparation for their flagship festival, the Championship of Online Poker (COOP).

The Champions Preseason Series runs from August 12-22, featuring a total of $850,000 in combined guarantees. The biggest share of the prize ($400,000) will go towards players in Pennsylvania, while those in New Jersey and Michigan will compete for $150,000 and $300,000 in guaranteed prize money respectively. In addition to that, PokerStars will also be awarding COOP tickets throughout the series.

Players across all three US states are being given the opportunity to secure Main Event seats for free via depositors’ freerolls running on August 22. To be eligible, players in PokerStars PA, PokerStars NJ and PokerStars MI, simply need to deposit at least $30 using the code CHAMPIONS. The freerolls will award 30 Main Event seats.

If you have yet to create an account with PokerStars, now is the perfect time to do so as the site is also awarding its new players a free ticket to the Main Event depositor freeroll, apart from the generous welcome package.

The winners of the Main Event will not only take home the top prize, as they will also receive a couple of tickets to a professional football match of their choice. Under the promo’s terms and conditions, the aggregate value of the tickets shouldn’t exceed $1,000, but still it’s another good reason not to miss the Main Event.

Additional Rewards Up for Grabs

Every player in the Champions Preseason Series will get the chance to win extra rewards by completing challenges. Those who take part in at least one Champions Preseason event will get a Kickoff Freeroll ticket for COOP. If you play 3 tournaments, you will receive a $3 Spin & Go COOP ticket. Play in 5 tournaments and take home a $10 ticket for the COOP Warm-up event.

Not only that! During the start of the series, PokerStars will host a freeroll online tournament which will award $1,000 in free sports bets. Stay tuned for more updates!