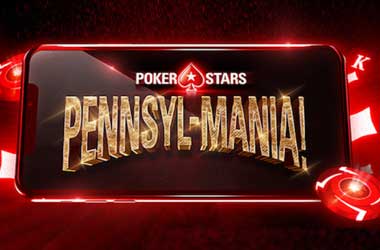 “Pennsyl-MANIA” is back for its third edition, and is once again creating a new record by upping up the ante, this time offering $500,000 in total guarantees, the biggest ever guarantee offered by PokerStars for a single tournament throughout the US regulated market.

Pennsyl-MANIA will get underway on December 27, with the final action playing out the following day, December 28. The event maintains its $200 buy-in, but with the guarantee being increased, the tournament will now need to pull in at least 2,689 entries to meet its target.

Players will kick off the action with 15,000 in chips, with up to five re-entries allowed. Late registration is open within 4 hours and 35 minutes.

PokerStars PA will also be running satellites and freerolls to give players the opportunity to join in on the action for a much cheaper price. They can take part in satellites running four times each day where they can win a free seat into the big event. With entry fees starting at only $10, the site will give away up to 30 Pennsyl-MANIA tickets, so players shouldn’t let this pass!

Another way to earn a free ticket is via a special Depositor Freeroll, wherein players will only need to deposit at least $30 into their PokerStars PA accounts using the bonus code “MANIA“. This must be done before 13:59 ET on December 27. Upon doing so, players will receive a seat into the freeroll which takes place at 14:00 ET on the same day. Those making it to the top 50 will earn free entry into the Pennsyl-MANIA tournament.

PokerStars will double the fun and excitement by hosting a brand-new series in the run up to the big event. “Turbo Week” will take place ahead of Pennsyl-MANIA and is also a big festival in itself, giving away another $500,000 in guaranteed prize money. Players will battle it out across 56 fast-paced tournaments that will be played in progressive knockout format.

Turbo Week kicked off on December 13, and will conclude on December 20, just a week prior to Pennsyl-MANIA. It will be headlined by two Main Events – the bigger one costs $200 to enter with $60K in guarantees on offer, while the mini edition has a buy-in of only $20 and awards $10,000 in guaranteed prizes.

Visit PokerStars PA for the full schedule and details.