PokerPaint Involved in Another Copyright Scandal

PokerPaint Involved in Another Copyright Scandal 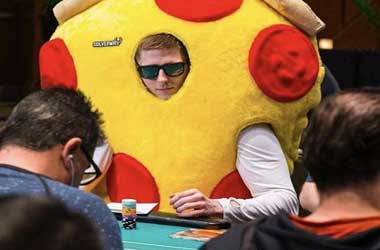 PokerPaint has once again become the center of controversy over copyright issues. The individual behind the PokerPaint ID is alleged to be Brett Butz who has been called out on social media for using other people’s images in promoting his poker NFTs on Twitter.

In a now-deleted tweet, Butz announced the upcoming release of some poker NFTs under his company PokerPaint. Apparently, the photos he used for the artwork are from somebody else. Danny Maxwell owns some of the photos used by Butz and he requested that they be removed as Butz had not asked any permission from him to use those images.

Brett you are still using some copyrighted images in your pictures mine included please cease & desist and remove any/all of my photos from these images.

Butz was involved in a similar controversy back in September which ended up in him issuing an apology, but it seems the PokerPaint founder hasn’t learned his lesson. Butz and his company’s illegal practice was initially exposed on social media by Hayley Hochstetter.

Hochstetter revealed that Butz reached out to her to ask for permission to use one of her photos back in June which she politely declined. But to her dismay, Butz proceeded to use the image. Daniel Negreanu also chimed in on the controversy describing Butz’s act as “shitty“.

No Apology From Butz

Butz seemed unapologetic at the start but after numerous call outs from the poker community, the PokerPaint boss eventually admitted that what he did was wrong. He acknowledged that he was ignorant about copyright law. He promised to continue doing business the right way moving forward and would educate himself regarding copyright infringement.

Barely three months after that copyright scandal, Butz is at it again and this time around he didn’t say sorry to the owners of the images he stole. Butz removed his original tweet which showed artwork based on other people’s creation, but he continued to promote his NFTs, saying he would give the photographer a portion of the money.

Butz has gone on to sell his NFTs based on stolen images for up to $1500 apiece, but with the poker community now aware of his bad tricks, it looks like it is just a matter of time before he is slapped with a series of lawsuits for his copyright infringements.