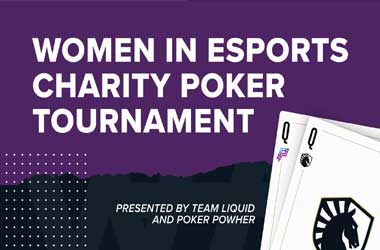 Poker Powher is joining forces with Team Liquid to host a poker tournament which aims to highlight the importance of female representation in poker and esports. Proceeds from the event will go to charity.

Among those who will participate are women who are currently at the helm of various esports organizations.

Heather “SapphiRe” Gazoro (Dignitas VP of Talent), Nicole LaPointe Jameson (Evil Geniuses CEO), Britanni Johnson (G2 Esports Head of Talent), and “Fastffy” (Team Liquid member and Twitch streamer) will battle it out at the poker table, with a goal to empower women, and show them that the game can be played by anyone, regardless of gender, race, color, and skill level.

The event is called the “Women in Esports Charity Poker Tournament“, will be a two-day affair, kicking off with an advanced player competition on March 25. It will then be followed by a beginners’ game on March 26. The action will be livestreamed on Poker Powher’s Twitch channel, and will also include commentary from female poker pros Gillian Epp, Alexandra “Doc” Chauran, Xuan Liu, and Melanie Weisner.

According to Cris Amaya, head of events at Team Liquid, the charity tournament has been put together in celebration of their Women’s History Month. It serves as a platform uniting women from major organizations, not just esports, and highlight their influence in the gaming industry.

Amaya said partnering with Poker Powher was a natural fit as both organizations share the same vision. Women are often intimidated from playing poker and esports because of the games’ male-dominated nature, and that is what they will try to address in the upcoming charity tournament.

While there’s still a long way to go before gender gap is totally eliminated in online gaming, both Team Liquid and Poker Powher believe that organizing a female-focused tournament is a great way to motivate women and let their voices be heard.

Poker Powher is a company committed to teaching women the fundamentals of poker and how they can use them to succeed in business and in life in general. It runs corporate workshops, virtual events, and clubs, exposing women to the game of poker, wherein they can learn about confidence, strategic thinking, capital allocation, risk management, and decision-making.

Poker Powher Managing Director Erin Lydon said their mission is not only to attract more women into poker, but also to educate them that poker is a “game changer“.