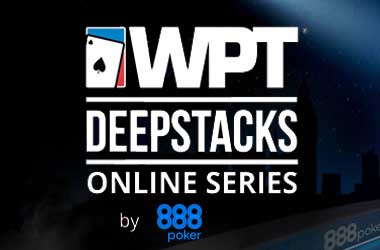 888poker is hosting a major online festival in the next few weeks as part of a new partnership with the World Poker Tour (WPT). A virtual edition of the popular WPTDeepStacks tournament series will run on 888poker’s global and European networks, including the segregated markets of Spain/Portugal and Italy. This marks the first time that an online poker festival will run across the entire 888poker network.

There will be three WPTDeepStacks series taking place simultaneously on 888poker’s three networks, each featuring 16 events. The festival will run from April 18 – 26, and will offer over $3 million in combined guarantees.

The biggest of the three series, the WPTDS London Online, will run on 888poker’s global network, where players will compete for over $2 million in guarantees, $1 million of that will be up for grabs in the marquee Main Event. The Spanish/Portugal and Italian markets will also have their own versions of the series, guaranteeing €400,000 and €350,000 respectively.

WPTDS London Online features the biggest-guaranteed Main Event of the festival. The London Main Event has a buy-in of $1,050, with $1 million in guaranteed prize money up for grabs.

Players may directly buy into the UK poker event via four starting flights, but they can also win a seat for a fraction of the price by taking part in a satellite tree.

The cheapest way is by participating in daily Pennybuy qualifiers for only $0.01, where players get a chance to win tickets to a sub-satellite. From there, they can then advance to the main satellite which will award seats to the $1,050 Main Event. For those who want a shorter route, they can directly jump into the main satellite for $109.

Apart from the Main Event, there are 15 other tournaments to choose from, and four days of livestreaming will be available, to be handled by Nick Wealthall, David Tuchman and WPT tournament director Matt Savage.

Smaller versions of the series will run both on the Spain/Portugal and Italy networks. WPTDS Iberia and WPTDS Italy will be headlined by a $150 Main Event, offering $150,000 in guarantees. Similarly, each of the series will also feature 16 events.

Spanish/Portuguese players will compete for €400,000 in prizes, while those in Italy can win a share of the €350,000 guaranteed prize pool.

Apart from cash, all of the events will also award a prestigious WPT DeepStacks trophy. Check out the 888poker website for more details.