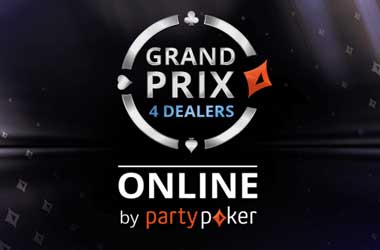 The temporary closure of casinos and card rooms worldwide has resulted in job losses and layoffs, affecting thousands of casino workers, most especially the freelance dealers who will spend the next few months without any source of income.

While the live poker scene has gone silent, online poker is enjoying a significant boost, as poker players continue the action at the virtual tables.

After stepping in to offer players an alternative platform to continue to play after the cancellation of numerous live events, partypoker now turns its attention to poker employees massively affected by the current global health crisis.

The online operator is set to host an online tournament to raise funds for freelance poker dealers.

The “Grand Prix 4 Dealers” will take place on April 26 to May 3, with a goal of raising $122,000. The money raised will benefit partypoker’s network of self-employed dealers who are currently faced with job uncertainties due to the ongoing pandemic.

partypoker’s Rob Yong has also pledged to donate $122,000 to the affected dealers if the target is reached, bringing to $244,000 the total amount of funds to be distributed among them. The online tournament comes with a buy-in of $55.

David Cook of GVC Holdings, the parent company of partypoker, said the company wants to offer help to the hard-working people who are part of the success of their live events. The fundraising effort will help sustain their needs until all of this is over and everything goes back to normal.

partypoker usually hires independent contractors for the majority of its LIVE festivals, including other events in partnership with Triton Series and the World Poker Tour (WPT). partypoker will begin giving one-off payments to freelance dealers in the weeks ahead.

A casino dealer in the UK receives an average wage of $10.44 per hour, with other private dealers earning $18.15 per hour, according to job site Indeed.co.uk. But these figures do not include the tips and bonuses given to them. While governments are currently putting in place emergency budgets for affected employees, including self-employed workers, some freelancers may actually get lower grants due to tax rules.

Among prominent names in the world of poker who have already made their donations include Joe Stapleton and Sam Trickett. Triton Poker also supports the cause by donating $50,000.

To learn more about the Grand Prix 4 Dealers online festival, check out the partypoker website.