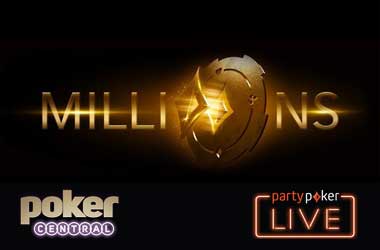 The highly popular partypoker LIVE MILLIONS kicked off this year at Dusk Till Dawn in the UK, followed by a South American leg which was held at the Enjoy Resort & Casino in Uruguay earlier this month.

With several more stops set to take place throughout the year, partypoker LIVE has recently announced a new way for players to win their way into these huge events for a cheaper price.

Players can now take a shot at MILLIONS Passport packages!

You can win one of the MILLIONS Passport packages up for grabs throughout the series by taking part in Phase 1 satellites which come with a buy-in of only $109. These satellites take place daily on partypoker, and a weekly final will be held every Sunday, during which a MILLIONS Passport will be awarded.

The package covers the tournament’s buy-in, hotel accommodation, travel and other expenses, with total value amounting to at least $11,000. Apart from that, Passport winners can also take part in events designed exclusively for passport holders, such as the £5,300 buy-in MILLIONS London which is open only to satellite winners and passport holders, meaning there is no direct buy-in to the event.

MILLIONS London will be attended by some special VIP guests, so you will get the chance to rub elbows with the top pros!

Here’s the most interesting part – the MILLIONS Passport is valid for use within 12 months after the time it is won, which means you can use it to enter into any of the MILLIONS events that are set to take place in Cyprus, Las Vegas and London. The passport can also serve as your ticket to the highly anticipated Caribbean Poker Party in November. It can also be used in the online edition of the tournament which takes place in September.

Remember that the only way to win a MILLIONS Passport is to start from Phase 1. There is no direct buy-in to the Sunday final. You can win your way into these phased satellites for free by joining freerolls running 24/7 on partypoker, or you can take part in feeders with buy-ins ranging from $1.10 to $22.

The partypoker LIVE MILLIONS is one of the biggest and most popular annual poker festivals in the world, featuring stops in different locations, with massive guarantees on offer. This season, the prestigious festival will give away over $62,000,000 in combined guarantees, the first player to be awarded with a $1 million prize this year was Swedish poker pro Anton Suarez who took down the MILLIONS UK Main Event in January.