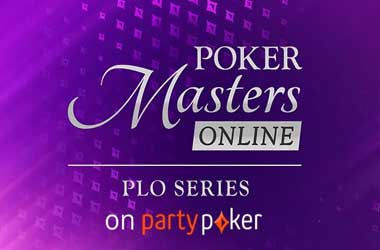 Following the recent success of their Pot Limit Omaha (PLO) events, Poker Central has put together a major online series dedicated to all players and fans of the four-card game. The Poker Masters Online (PMO) PLO Series offers $10 million in guarantees and will run on June 21-29 on partypoker.

The forthcoming series features a total of 29 events, with buy-ins ranging from $500 all the way up to $50,000. Each event will be played for two days.

The main highlight of the festival is the PLO Series Main Event which comes with a massive guaranteed prize pool of $1.5 million!

The series also features a leaderboard, where the player finishing on top will be crowned as PMO Pot Limit Omaha Champion, and will be awarded with the much-coveted Purple Jacket, alongside a $50K Championship seat.

All of the final tables will be streamed via PokerGO with commentary from renowned poker broadcaster Jeff Platt and award-winning content creator Joey Ingram. Spectators at home can also watch the final action on the partypokerTV Twitch channel and PokerGO’s Facebook page.

The forthcoming PLO Online Series is the newest event to take place as part of an ongoing partnership between Poker Central and partypoker. The two major brands recently joined forces in the hugely successful Poker Masters Online, which took place back in April. It was the first time that the popular event was held online, mainly due to the coronavirus pandemic.

The online series ended up attracting a total of 124 unique players, generating more than $34 million in total prize pool, doubling its initial guarantee of $16.5 million.

After all 30 events had played out, Alexandros Kolonias emerged as overall champion, topping the leaderboard race to win the Purple Jacket and $50K extra cash. The Greek poker pro, who won the 2019 World Series of Poker Europe Main Event, managed to cash in 11 events throughout the festival, capturing two titles, for total earnings of over $1.2 million.

Poker Central’s Business Officer J.R. McCabe said they’re happy to renew their partnership with partypoker and provide their players and fans with an online platform where they can continue to enjoy the game and compete for huge prizes. John Duthie of partypoker is equally delighted about the upcoming event, saying the top-notch PLO action and exceptional production and commentary shouldn’t be missed.

The full schedule of the first ever PLO Online Series is available on pokercentral.com.