Michael Jozoff Takes Down WSOPC Bicycle Casino ME for $161,500

Michael Jozoff Takes Down WSOPC Bicycle Casino ME for $161,500 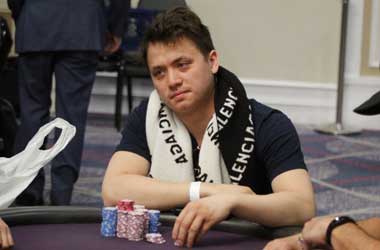 The World Series of Poker Circuit (WSOPC) stop at The Bicycle Casino in Los Angeles, California has just concluded. Among the biggest winners to emerge from the series was Michael Jozoff who shipped the Main Event title for $161,500 alongside his first gold ring.

The California resident bested a field of 550 entries to secure his first major title and just his fifth recorded live tournament cash. Jozoff, who is only 22 years old, started his poker journey online. He began taking part in live tournaments just last year.

According to his Hendon Mob profile, Jozoff, a New York native who graduated with a degree in finance from the University of Southern California, won his first live cash in a $1,000 No-Limit Hold’em event during the 2021 World Series of Poker (WSOP). In February, he won a $2,200 NLH 6-Handed event at the L.A. Poker Classic in Los Angeles.

Nine players made it to the final table with Jonathan Williams becoming the first casualty, finishing in 9th place for $15,160. The eight remaining players returned on the final day and shortly after the action started, Lee Ci was eliminated having gone all-in with A-4 suited against the A-Q of Iris Angeleri. Ci took home $19,105 for finishing 8th.

In less than an hour, Corey Brass followed Ci to the rail after losing a preflop showdown against Steve Hyung with A-2 versus K-10. Brass finished 7th for $24,385. Jozoff then scored two consecutive knockouts. He first eliminated Andrew Ostapchenko in 6th place for $31,530 and then finished off Marc Robinson in 5th place for $41,285.

Hyung was the next to go, this time courtesy of Eugene Tito. Hyung was left short after battling it out with Angeleri, his top pair of aces dominated by Angeleri’s flopped set of deuces. He eventually went all-in with 10-5 suited which was defeated by the K-2 of Tito. Hyung walked away with $54,740 for his 4th-place finish.

With three players remaining, Angeleri pushed all of her remaining chips to the middle with pocket sevens. Tito called with pocket kings. Angeleri failed to find help from the turn or river to end her bid in 3rd place for $74,480.

US poker player Jozoff entered heads-up play with a 2:1 chip advantage over Tito and never looked back. In the final hand, Tito went all-in with As10h and Jozoff quickly called with KdKc. Tito’s cards did not improve on the board and Jozoff ultimately secured the title. Tito took home $99,480 for taking second place.