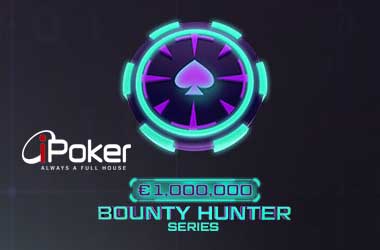 The iPoker Network has re-launched one of its most popular tournament series, the Bounty Hunter Series! The latest edition of the progressive knockout festival kicked off on February 26, and will run through March 7, featuring a massive €1 million in guaranteed prize pool.

The Bounty Hunter Series last ran on the iPoker Network in 2018. The festival marks its comeback with a total of 83 tournaments, which players can enter for as low as €10, making the series accessible to most players.

The series will officially close on March 8, via a special Champions-only event with an extra €10,000 in prize money up for grabs. Those who won any of the 83 Bounty Series events are the only ones eligible to take part in the tournament.

Two of the 83 events on the schedule offer the biggest guarantee of €100,000. The first one, Bounty Hunter Series 77, has a buy-in of €100 and will be played in deepstack format. The other tournament, Bounty Hunter Series 80, will be a high roller affair and features a €1,000 entry fee. Both events get underway on March 7.

Each of the 83 events allows up to three re-entries, with at least eight events running daily. Players can choose from a variety of formats and structures, including deepstack, six-max, full ring events, turbo, and Six-Plus Hold’em.

Players can take part in the events for a fraction of the price via satellites, with buy-ins starting at just €1. They’re currently running across the iPoker Network lobbies, so check them out!

Apart from satellites, there are special Bounty Hunter Series missions also running on some iPoker skins. Paddy Power Poker for instance has four missions where players can win freeroll entries as well as Bounty Hunter tickets.

The Knockout Mission will require you to knock out two players in one tournament – you’ll earn entry to Freeroll #3 as a reward. In the Revenue Mission, just earn 1,000 poker points throughout the series and win €10 worth of Bounty Hunter ticket.