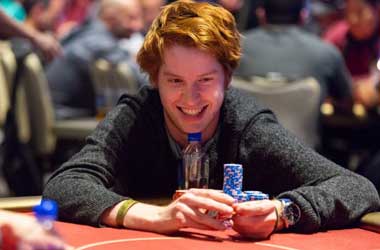 The 2022 World Series of Poker (WSOP) has crowned its latest champion, England’s Harry “timexCNT” Lodge, who took down the $7,777 Lucky 7’s No-Limit Hold’em Online High Roller. The English poker pro topped a 161-entry field to win a career-best $396,666 and his first gold bracelet.

Lodge navigated his way through a tough final table which included no other than poker veterans Daniel Negreanu, David Peters and Mike Watson. He entered heads-up play behind in chips but managed to turn the tide in his favor.

Lodge has had a decent run at the 2022 WSOP so far with a total of nine cashes. The last time he came close to winning a bracelet was in 2017 when he finished third in the $888 Crazy Eights event.

Lodge was the chip leader when the final table began but Andrew “RobertB14” Robl took the lead after he busted Watson with pocket aces versus ace-king. Watson took home $73,401 for his 6th-place finish. Robl went on to eliminate Negreanu with ace-eight against pocket jacks. The GGPoker ambassador, who has yet to win a bracelet at the 2022 festival, finished 5th for $88,081.

Lodge scored his first knockout during four-handed play when his ace-king defeated Peters’ ace-five to send the American poker pro to the rail in 4th place for $102,762. Heads-up play was set with the exit of Daniel Lazrus whose king-eight didn’t work out against the pocket queens of Robl. Lazrus collected $132,122 for finishing 3rd.

The one-on-one match kicked off with Robl enjoying a nearly 3:1 lead over Lodge but the latter quickly overturned his opponent’s lead after successfully dealing with a huge river bluff. In the final hand, the English pro’s ace-king defeated Robl’s queen-jack to take home the top prize and his maiden bracelet. Robl walked away with $231,213 for finishing 2nd.

The tournament attracted many other popular names who also took home some cash, including Dario “Sirio87” Sammartino who fell short of reaching the final table after finishing 7th.

Darren “kingstayking” Elias also ran deep in the tournament with his 10th place finish, while Adrian “Poker4202” Mateos failed to sustain his early momentum and ultimately bowed out in 18th place.