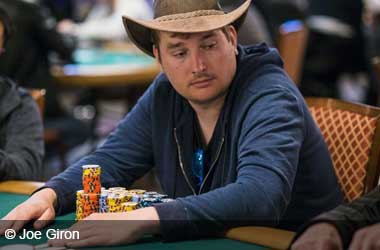 The Poker Players Championship, one of the key events of the World Series of Poker (WSOP), has crowned a new winner. German poker pro Christian Rudolph outclassed a 407-entry field to walk away with a massive $1.8 million top prize alongside the prestigious Chip Reese Trophy.

Rudolph entered the final table third in chips, but he slowly climbed his way to the top after scoring two knockouts as the game intensified.

He crushed Jason Koon‘s dream of winning his maiden bracelet after sending him to the rail despite being the chip leader when the final action kicked off. Rudolph then finished off another poker star Chris Hunichen heads-up to ultimately secure the title.

The final table began with shallow stacks, Koon leading the chips, Shankar Pillai coming in second, and Rudolph holding the third largest stack. The first elimination took place early in the game when Aliaksei Boika three-bet all in with Ad5d, which prompted a call from Pillai who held AhJh. Boika failed to improve through the river and eventually left the table with $154,416 in ninth-place winnings.

Koon’s dominance faltered during eight-handed play when Hunichen doubled through him, grabbing the lead. The former chip leader slipped down to fifth place following a pre-flop showdown with Hunichen. Paulius Plausinaitis became the second player to bust after losing a hand against Aram Zobian. He walked away with $210,079 for finishing eighth.

Koon got involved in a preflop race with Rudolph, the American holding 10s10d against his German opponent’s AhQs. The board went in Rudolph’s favor and Koon had to end his bid several spots away from claiming his first bracelet. The high-stakes star collected $285,808 for his seventh-place finish.

Rudolph went on to eliminate Brunno Botteon (6th) and Aram Zobian (5th) in succession, both taking home $388,837 and $529,005 respectively for their efforts. Rudolph’s knockout streak continued after he sent Aleksejs Ponakovs to the rail in 4th place for $719,700.

Pillai then got all of his remaining chips in with Ah9c; Hunichen called with AcKd, and while the flop gave both players a pair of aces, the eventual runner-up’s kicker held and Pillai had to settle for third place with $979,138 in winnings.

Heads-up play began with Rudolph holding the chip advantage. Hunichen put up a great fight, mounting a small comeback at one point, but Rudolph managed to widen the gap even further and ultimately made his victory official when his Qh10c defeated Hunichen’s KhQs, with the board running 10h9d6s3d7h. Hunichen walked away with $1,332,097 as runner-up.