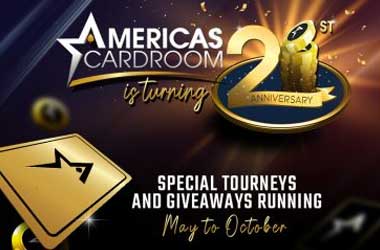 Americas Cardroom (ACR) is marking its 21st year in the industry with a series of celebrations running across six months.

It all began with a pre-party celebration held in May and June during which the operator held a Punters Pad Party in Las Vegas and also gave away tournament tickets for the MOSS Main Event. For those who missed out on the events over the past two months, we’re here to tell you that the party is not over yet.

The celebrations continue with several amazing events scheduled between now and October, starting with what the operator has dubbed as the “biggest-ever” Mini Online Super Series running this July. On top of that, players can also take a shot at a special $1 million guaranteed Anniversary Tourney which has a buy-in of only $109.

The July events culminate in the $10 Million GTD Venom Tourney with ACR giving away multiple tickets. The tournament costs $2,650 to enter but you can get in for much cheaper via freerolls and satellites running at the site.

You can start your journey at absolutely zero costs through the Venom Fever Freeroll MEGAs with 10 tickets to a Super Satellite tournament up for grabs. If you get past the Super Satellite you will then advance to the Mega Satellite which awards seats to the $10M GTD Venom tournament. If you want a shorter route, you can always skip some levels to get closer to a $2,650 ticket.

The Venom tournament will be followed by an OSS Cub3d tournament series taking place next month.

ACR will wrap up its 21st-anniversary celebrations with multiple after-party events running between September and October. Players and fans can look forward to several surprise heads-up challenges versus the site’s CEO Phil Nagy and some ACR ambassadors. The operator will run a live event in Uruguay in October and it will come with multiple package giveaways, plus a massive party for all players.

And to cap it off, there will be a surprise tournament that will offer a huge prize pool for just a small buy-in!

Be part of the celebrations while enjoying ACR’s no-download mobile poker app which allows you to hit the tables right in your smartphone’s web browser. No need to install anything, you can get started instantly, anytime, anywhere.

For the full details of the six-month anniversary party, visit the ACR website.