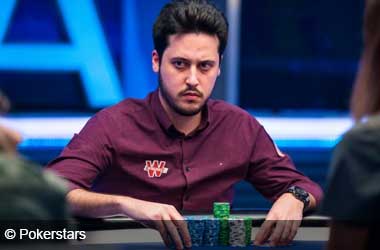 Spanish poker pro Adrian Mateos has added another major title to his name after taking down the 2019 Caribbean Poker Party MILLIONS World Bahamas Main Event for a whopping $1,162,805 in top prize.

With three players remaining, Mateos struck a deal with Aaron Van Blarcum and Chris Hunichen, leaving $100,000 and the title to play for.

In the end, Mateos came out on top, with Blarcum and Hunichen finishing second and third respectively.

The $10,300 buy-in tournament attracted a field of 948 entries, which included partypoker ambassador Ludovic Geilich, 2018 GPI Player of the Year Alex Foxen, and WSOP bracelet winner Ryan Reiss, all of whom failed to make it to the final table.

The three final players at MILLIONS World were Mateos and American poker players Aaron Van Blarcum and Chris Hunichen. The three players discussed a deal while on a break, setting aside $100,000 and the trophy for the player who eventually comes out on top. Hunichen exited in third place after shoving with ace-three against Van Blarcum’s ace-king. Hunichen walked away with a nice payout of $1,097,195.

Mateos and Van Blarcum then engaged in a heads-up battle with both players almost equal in chips when the final action started. But Mateos managed to make things work in his favour as play progressed, and, by the time the final hand was dealt, the Spanish pro was already holding a massive lead. Mateos made his victory official after hitting a pair on the flop, enough to finish off Van Blarcum in second place for $970,000.

Back to Back Victory for Adrian Mateos

Mateos’ latest win follows on from his victory at another marquee event at the 2019 CPP. He had a great run at the $25,500 buy-in No-Limit Hold’em High Roller, where he bested a 125-entry field to capture $520,464 in first-place winnings.

The 25-year-old has continued to establish himself as among the best players in the world, with his total live earnings now sitting at $19,423,996. He currently occupies the No. 1 spot in his home country’s all-time money list (27/11/2019), more than $7 million away from Carlos Mortensen who sits in second place.

Mateos currently has just under $19.5 million in total career prize money and is ranked 27th on the Hendon Mob’s All Time Money list. The young Spanish poker pro has a bright future before him as he is always working on improving his game.