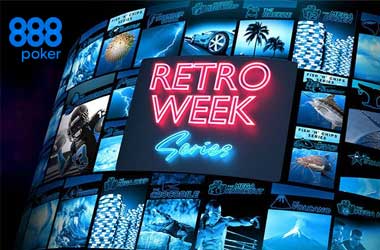 888poker’s Retro Week proved to be a huge hit after it awarded nearly $1 million in total prizes, surpassing its initial guarantee. The series, which took place as part of 888poker’s 20th-anniversary celebrations, featured some of the most popular tournaments that the operator has hosted over the past two decades.

888poker placed an $888,000 guarantee on the throwback series but the huge turnout of 15,844 entries ended up generating $981,256 in total prize pool. Players from across the globe, including the UK, Canada, Denmark, Germany, Sweden, Malta, Brazil, Lithuania, Montenegro, Mexico, and Thailand, flocked to 888poker during the course of the series. Those from the UK dominated the action, winning four titles.

The series kicked off with a bang on March 20 with the opening events smashing their guarantees, including the $100,000 Sunday Challenge and the $50K GTD Whale tournament.

Retro Week culminated in the $215 buy-in Main Event which came with a $300,000 guarantee. The tournament pulled in a 1,487-entry field which was ultimately topped by “omgLUNAAA” from Malta who took home $41,300 in top prize. “Gaby2008” from Canada took the runner-up spot.

The schedule also featured a mini version of the Main Event, the Mini Mega Deep, which cost just $33 to enter. A total of 1,734 players registered for the tournament, creating $52,020 in total prize pool. The biggest slice went to Montenegro’s “iperenoeil13” who won the event for $7,148.

Retro Week also saw some prominent names taking part, including Dominik “888Dominik” Nitsche who finished strong in one of the final events of the series. The four-time bracelet winner, who currently serves as 888poker ambassador, walked away with $9,180 for finishing second in the $525 Whale tournament which was won by “FoldestJaEh” for $14,050.

With just six events falling short of hitting their guarantees, 888poker’s Retro Week series has been a massive success overall, and players can expect more tournament action to take place at the site as its 20th-anniversary celebrations continue.

Meanwhile, players can shift their attention to the operator’s upcoming live event in London, the 888poker Live High Stakes Festival, which will take place at the famous Grosvenor Victoria Casino from April 20 to May 1.

The series features nine events with buy-ins of between £150 and £3,000. The schedule is headlined by the multi-flight £2,100 Main Event which gets underway on April 28. 888poker will be hosting satellites for this tournament which players can enter for as low as $0.01.