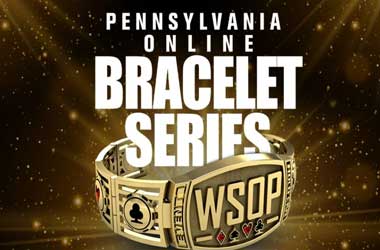 For the first time ever, players in Pennsylvania are given the chance to compete for a gold bracelet without going elsewhere, following the launch of WSOP.com in the state.

Local players will have to create a WSOP PA account as they’ll be playing in a separate pool for now.

Meaning, they will not be able to compete with players in the WSOP/888 US network which combines the New Jersey, Nevada, and Delaware pools. WSOP.com entered the PA online poker market on July 12.

Players in Pennsylvania will compete in eight bracelet events for an average buy-in of $922, lower than the average entry fee of $1,190 in the ongoing bracelet series for New Jersey and Nevada players.

The most expensive tournament on the schedule is Event #3 No-Limit Hold’em High Roller which costs $3,200 to enter. It takes place on August 10. The rest of the events feature buy-ins of between $500 and $1000.

This year’s WSOP will be the biggest ever in terms of the number of gold bracelets on offer. With an eight-event PA series being added to the schedule, there are now a total of 177 bracelets up for grabs – 66 are awarded via the domestic and international legs of the online bracelet series on WSOP.com and GGPoker, while players are set to compete for 88 bracelets in the upcoming live festival at The Rio in Las Vegas this September.

WSOP Europe, which kicks off in November at the King’s Resort in Czech Republic, will also award 15 gold bracelets.

The total number is expected to grow to 185 when WSOP.com launches in Michigan, assuming MI will also have its own bracelet series similar in size to that in PA. That’s highly likely, with WSOP Executive Director Ty Stewart previously stating that players in both the Keystone and Wolverine states would be given the opportunity to compete for gold bracelets.

WSOP.com is set to enter Michigan this year, as it continues to boost its poker presence in the US.