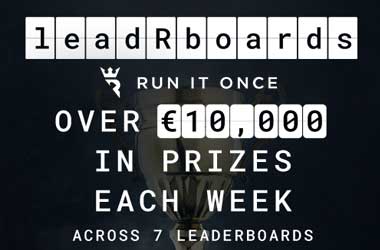 The recent launch of the “leadRboards” promo on Run It Once (RIO) resulted in a massive surge in traffic, with the site reaching a new milestone on June 15, when it recorded the most hands played in any given day. The new weekly cash game promo kicked off on that day, and will initially run through to June 28.

Due to this, RIO is boosting weekly leaderboard prizes by 50%, which means the top finishers will get a share of €15,000 worth of prizes on the second week of the promo, instead of the original €10,000.

The prizes will be split between three No-Limit Hold’em and four Pot-Limit Omaha leaderboards according to stake levels. The breakdown of cash prizes with the corresponding stakes is available on the RIO website.

Initially, only the top 5 players on the leadRboard are eligible for some prize money. However on the second week, prizes will be up for grabs for the top 30 places making it easier for players to boost their earnings. To motivate you, RIO is awarding up to €2,000 in top prizes, but if it’s quite hard for you to achieve, you can aim for a spot in the top 30 and instantly win some extra cash!

Players earn points according to the rake being generated (1 point for every €1 in rake). So if you are able to rake €130, you’ll also receive 130 points. You may check your own position in the weekly race via the RIO lobby. It will be visible to you upon logging into the client.

If you win some leaderboard cash, expect it to be credited to your account within 72 hours of the conclusion of each week.

Apart from the new weekly leaderboard promo, RIO is also running a first time depositor offer until June 30. Under the new “Bankroll Builder” promotion, players making their first deposit on the site will have their welcome bonus doubled for four weeks, plus extra rewards, and free RIO training!

RIO is the brainchild of American poker pro Phil Galfond. The three-time World Series of Poker (WSOP) bracelet winner launched the site in February 2019, and since then it has achieved increasing success, with their innovative promotions such as Aces Races, Cash Boosters, and their loyalty rewards programs among the best in the market today.

The site still has a long way to go but current traffic numbers show it’s heading in the right direction.