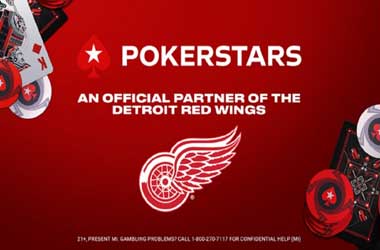 PokerStars has formed a new partnership with the Detroit Red Wings, a professional ice hockey team that competes in the National Hockey League (NHL).

Michigan residents love poker and hockey which is why PokerStar’s decision to join forces with one of the oldest NHL teams is a step in the right direction.

Since launching in 2021, PokerStars has dominated the online poker market in the Wolverine State there but the operator doesn’t want to rest on its laurels. By establishing a long-term partnership with the Red Wings PokerStars will be able to expand its brand to new audiences and drive more growth for the company.

As part of the multi-year agreement, the PokerStars logo will be displayed on the ice level at Little Caesars Arena, the home of the Red Kings. The multi-purpose arena is operated by Ilitch Sports + Entertainment, and the company’s President and CEO Chris McGowan welcomed the partnership, saying it is something that hockey and poker fans alike will enjoy.

The partnership will also give huge benefits to players on PokerStars Michigan as they’ll now get the chance to win some exciting Red Wings prizes including game tickets, merchandise, signed memorabilia, and many more. The iconic Winged Wheel will also feature on the PokerStars website and all PokerStars MI marketing and promotional materials.

PokerStars US Managing Director Severin Rasset said they’re looking forward to delivering “epic experiences” for PokerStars players and boosting their offerings not only for players based in Michigan but also those throughout the US.

The Red Wings have bounced back stronger this year after a poor run in the last season. The team finally made it to the Stanley Cup Playoffs once again and is expected to give its Eastern Conference rivals a good run for their money. PokerStars’ decision to partner with the NHL franchise just as it is recovering from a devastating 2021-22 season is simply right timing.

Michigan is the fifth US state to open a regulated online poker market, with PokerStars among the first operators to launch in the state. Right now, two other online poker networks are operating in the state, WSOP.com and BetMGM Poker. Michigan is home to WSOP Main Event champions Ryan Riess and Joe Cada.