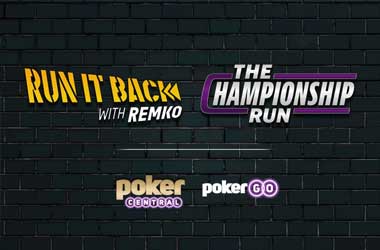 There has been an increasing demand for indoor entertainment over the past few weeks as people stay at home in line with stringent measures to curb the deadly coronavirus. Some are glued to TV, others turn to their mobile gadgets to kill time, while others go online to entertain themselves and ease their worries and fears amid this ongoing global crisis.

Poker players will be happy to know that Poker Central is releasing two new shows that will bring back some good memories of the golden years of poker. More details below.

Run It Back With Remko

The first show is hosted by freelance content producer Remko Rinkema and is titled “Run It Back With Remko“. Remko will interview some of the world’s best poker players, (one guest per episode), and both will offer their own commentary to some great poker footage from the good ol’ days.

The first episode features no other than Daniel Negreanu, one of poker’s most popular stars and ambassadors. The Poker Hall of Famer reviews some classic poker footage, such as those featuring him and another popular poker star, Phil Hellmuth. Negreanu gives his take on how the game of poker has evolved through the years, and Rinkema makes for a perfect commentating partner. This excellent format deserves to stay on air even after this whole coronavirus pandemic.

Poker Central President Sam Simmons says they recognise the increasing demand for exciting poker content these days, as poker players and fans remain at home due to the pandemic. Simmons says their main goal is for poker audiences to still feel the spirit of the game during this difficult time. Viewers can take advantage of a free one-month trial by using the code WATCHPARTY.

Run It Back With Remko and The Championship Run premiered on March 26 and 27 respectively, and will be released weekly.

The second new show is called “The Championship Run“, a program that features some of the most memorable and iconic poker victories of all time, headlined by the “Moneymaker Effect” – Chris Moneymaker‘s massive victory in the 2003 World Series of Poker (WSOP) Main Event, which started the so-called “poker boom”.

The show fronted by Jeff Platt, looks back at Moneymaker’s journey to victory, from winning an online satellite to defeating Sam Farha heads-up to claim a life-changing, seven-figure top prize. That winning moment catapulted Moneymaker to superstardom, and secured him a major sponsorship with the world’s largest online poker site, PokerStars.