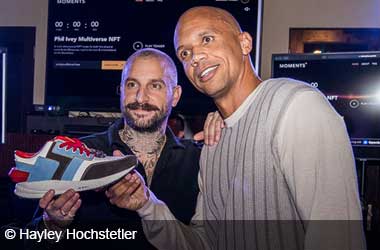 Phil Ivey showed up at a special Las Vegas party last week which was hosted at a $4 million Vegas mansion that covered over 8,500 feet. The guest list was impressive and was by invite only. Ivey wasn’t a guest at this party as he was one of the hosts along with his business partner Dominic Chambrone who is known as “the Shoe Surgeon“.

There were a number of prominent names at the party which included poker players Jamie Kerstetter and Ebony Kenney, WPT President Adam Pliska and ex-NFL running back Marshawn Lynch.

The Shoe Surgeon was the man who designed the 24 carat $100,000 sneaker for NBA star LeBron James. He worked together with Ivey to come up with a unique NFL sneaker that took two cards from Ivey’s famous High Stakes Duel battle with Tom Dwan and incorporated each of the cards on the shoe tongue.

Ivey said that he met Chambrone in September and the two decided to come out with a unique NFT sneaker. They came up with the design and the finished product is just under a month.

This NFT shoe is a one-of-a-kind and is a collector’s item. Both Ivey and the Shoe Surgeon are proud of their work so far and are auctioning this collector’s item. The opening bid commenced at $50,000 and the auction will remain open for a week. The winning bid will be announced at the end of the week.

The poker world wanted to know why Phil Ivey hasn’t been playing any 2021 WSOP bracelet events. Ivey has 10 WSOP bracelets to his name and has been stuck at 10 for quite some time now. In the past few years, Ivey has deliberately not played in the U.S and at WSOP tournaments because his winnings were being confiscated due to his legal issues with the Borgata.

However Ivey and the Borgata have sorted out their legal troubles and he can now play live poker in Nevada without having to worry about his winnings getting seized. Ivey said that if he did end up playing a WSOP bracelet event, it will most likely be the 2021 WSOP Main Event.

The 2021 WSOP Main Event will commence this week which means Ivey will have to make a decision by the end of this week.